The Stuttgart Football Weekend came about due to cities I wanted to visit as much as the football.  I am sure I am not alone when contemplating new grounds to attend, I also like to fill up the weekend with other activities and live the place we are visiting.  Stuttgart was one of the largest cities I had yet to visit in Germany and that was an immediate interest. Stuttgart has the 6th largest population in Germany of approximately 634,000. 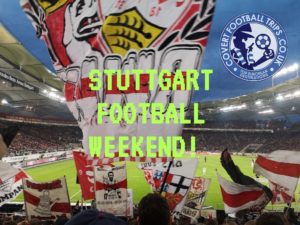 One of the appeals of Stuttgart was that the cheapest method of getting there was flying into Baden-Baden also helping make it a slightly longer weekend.   We opted for a 15.30pm flight from Stansted to arrive at 17.55pm.  The train to Stuttgart was just over one and a half hours and we were in Stuttgart by 9pm, the night before the match.  The flights cost just £44 return

The Cannstatter Kurve is situated behind the goal amongst the Ultra’s and at 17.5 Euro’s may be a struggle to get hold of however this is the area we wanted to experience and maybe because Stuttgart were struggling at the foot of the table we were able to source these.  Unlike many paper tickets, these were great with a fantastic image of the Mercedes-Benz Arena. 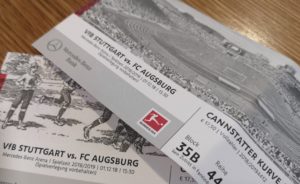 We started match day with a great breakfast which we had booked in advance at Der Rote Hirsch.  The Weißwurst (German White Sausage) is very traditional in Bavaria, is made from minced veal and pork back bacon and simply cooked in boiling water for 10 minutes.  It is also traditional to be served with Pretzels.  Certainly a venue we would recommend. 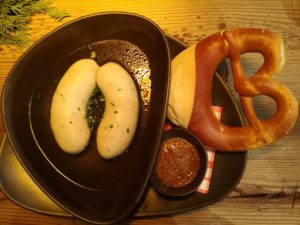 Our Stuttgart Football Weekend, like many of our trips we manage to visit on the coldest weekends.  I suppose that should be expected in December.  However, rather than getting a U-bahn we took a long walk to the stadium where we hoped to find some bars along the river.  Before getting to the stadium we came across a fantastic little bar for home supporters and were in there early enough (well, as soon as the doors were open!) and were able to explore the memorabilia of show before the bar became full.

The Stuttgarter Hofbrau is actually a brewery in Stuttgart so either this bar was owned by the brewery or heavily sponsoring a local bar.  Whatever it is, this is THE bar to visit pre-match.  It was cosy, friendly and no matter how busy they got, the beers kept flowing with exceptional table service. 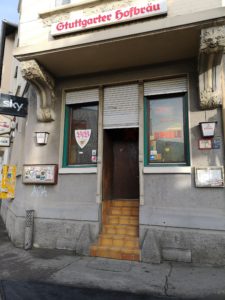 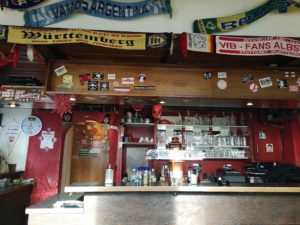 Memorabilia filled the bar close to the stadium. 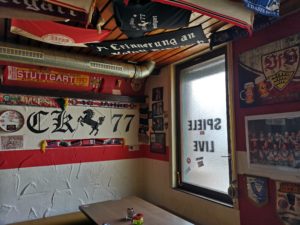 The bar was home to several Stuttgart Fan Clubs. 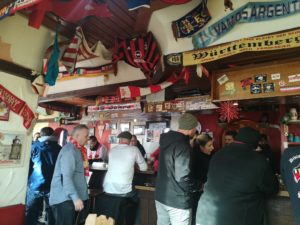 Arrive early to get a table as it’s a small venue.

The walk from the bar to the stadium was great.  As with most grounds we visit I recall bottle collectors, as described in our recent report on a trip to Mainz.  As we walked pockets of Augsburg fans were amongst us.  Every 15 seconds or so they would shout, not too loudly, “Augsburg”.  Just the one word.  I’m not sure if they were conscious of being in small numbers or whether it was because that’s what they say/sing.  Whilst not inventive, it was memorable and I look forward to a trip to Augsburg soon.

Inside the Cannstatter Kurve it was already extremely busy however we were able to squeeze ourselves into an extremely central position behind the goal which would give us maximum impact.  Flag Bearers were all round us and a megaphone directly in-front – this was going to be epic…..

However, as we had entered the stadium we were passed an A5 leaflet.  Normally when someone is handing out leaflets most people reject it however these were being thrust into every supporters hands, including our own.  A Stuttgart supporter who we stood next to was very happy to explain the leaflet, that this was a protest against the increasing commercialisation of German Football and specifically Bundesliga matches being played on Monday evenings – the first being in two days time between Nuremberg and Bayer Leverkusen, whist the protest went deeper still, also protesting about midweek matches in general.

It turned out that fan groups across the Bundeliga had come together to create this silence.  Whilst on one hand we were disappointed as we were not seeing the Cannstatter Kurve in it’s full colour, we were appreciative of witnessing and being a part of this amazing feat which is very unique.  The protests were successful with the DFB announcing that from the 2021/22 season Monday night matches would be scrapped.  This example of fan power only happens in Germany due the structure here, in particular the 50+1 Rule (described here) 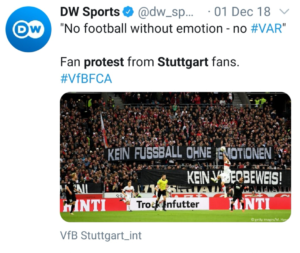 DW Sports Tweeted this photo of Stuttgart Fans during the protest.

However, the second half changed as the protest lasted just the first 45 minutes.  Then we saw and heard what we expected on this Stuttgart Football Weekend, as the flags were raised and a cacophony of noise was sudden and constant.  The Capo (that’s the loud guy at the front leading the chants normally on a megaphone) orchestrated wave after wave, song after song.  Naturally we only have a couple of video’s as we just wanted to be part of it.

The most memorable part was the “fight”.  Now, I have seen this at other grounds where on the instruction of The Capo (you’re getting familiar with the term now right?), the fans bounce around a little bit, intentionally bumping shoulders in a very jovial manner.  However at the Mercedes-Benz Arena it was up a notch and it caught us out a little.

Being in the middle, in fact bang in line with The Capo, the instruction saw a parting of the crowd.  As fans moved away to the left and the right a downward concrete path towards the front was visible.  Had we been highlighted as invaders of the Kurve?  What was about to happen?  Then, a tap on the shoulder from the same fan who had been discussing the protest with us (who we named DCL as he looked like Dominic Calvert-Lewin) who advised us of the fight and that we should move over, so we joined his side.  The instruction was then passed for the two sides to merge with shoulder barging, which amongst some sets of fans was significant.  We managed some shoulder barges with some equally cautious Stuttgart fans and the event passed without embarrassment.

Another quite common event during the match is the crouching down and then, again on the instruction of the main man, everyone rises to their feet and reverts to the loud chanting. 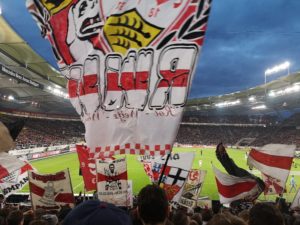 The view from The Cannstatter Kurve. 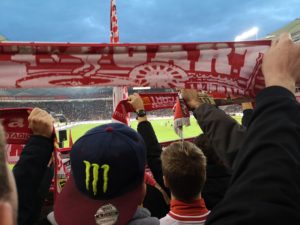 The Cannstatter Kurve was a sea of scarves and flags for 45 minutes.

The match in the middle of the 2018/19 season, was won by a single goal scored in the first half by Donis, a deserved but nervy win.  That victory saw Stuttgart climb off the bottom of the table.  However this would be momentary as they were relegated at the end of the 2018/19 season whilst Augsburg survived. 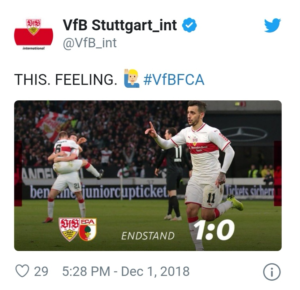 VfB Stuttgart tweet out their delight at winning the match.

Stuttgart itself is a very vibrant city and we explored many corners.  If you like good beer then we recommend visiting Ackermanns Kneipe und Bar.  This was a venue we researched in advance and was quite remote however we spent a good two hours here before calling a taxi for a ride to the main bar area. 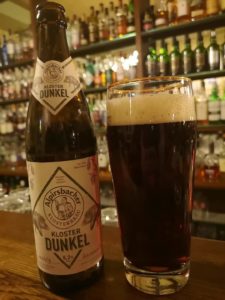 Ackermanns is a great bar to visit if you love good beer.

Now, as mentioned at the start, this trip was about maximising the weekend so as part of the itinerary we headed back to Baden-Baden on the Sunday to check out the much talked about Caracalla Therme.  This was a place I had visited earlier in the year so wanted to showcase it to my travel companion.  Essentially this is an inside and outside area of thermal water covering 4000 square metres so a perfect place to relax after two heavy days of football, beer and walking.  If you are looking to tie in an experience of football and leisure with a partner, this itinerary of a Stuttgart Football Weekend can really offer something for everyone. 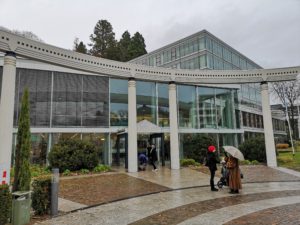 Caracalla Therme is a perfect place to unwind if travelling from Baden-Baden.

We decided to stay at The Lowenbrau Hotel and Restaurant.  This is right in the town centre, just a 3 minute stroll to the Therme.  As it was December the whole venue was beautifully decorated for Christmas so again you can help merge a Stuttgart Football Weekend into a much bigger and varied break.  The restaurant offers a range of traditional Bavarian dishes. 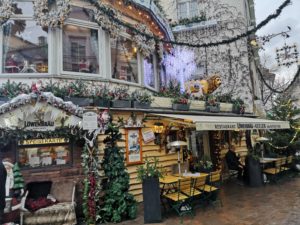 The Lowenbrau offers accommodation and a fantastic bar and restaurant.

On this final night we managed to find Griffin’s Pub, a bar which was showing the Merseyside Derby, in fact we had contacted several bars in Baden-Baden ahead of our visit and this one agreed to show it.  After the match (that one where Pickford threw the ball in the net to hand Liverpool a last minute win), we got speaking to Peter, a local Karlsruhe fan, who told us all about their 7-0 win against Valencia in the 1994 UEFA Cup.  Peter was accompanied by a local hotelier, Stefan, who spoke to us long after the football had finished.

As we left and approached the barman to pay the bill, approximately 70 Euro’s, we were told that the bill had already been settled for us which was a very unexpected, but not uncommon, situation when in Germany and getting to know the locals. Before we left Stefan gave us his business card for his Hotel Sophien Park, whilst we haven’t been back to stay since, one good turn deserves another and do consider his hotel if staying in Baden-Baden, it does look excellent.

It was after midnight when we left – knowing full well we had an early morning flight to catch, but what a great night.  This weekend had been exceptional so if heading to Stuttgart do look to tie in a trip to Karlsruhe/Baden-Baden whether there is a match on or not.

If you like this review, why not read our recent blogs on trips to Nuremburg, Dusselfdorf, Mainz and Bochum.

Please check back next Friday for our latest addition to our blog.