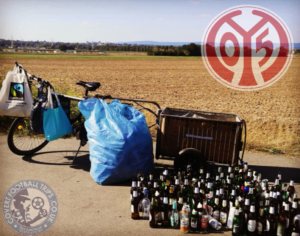 So this is the second part of our football weekend back in September, visiting the Mainz Opel Arena.  Our trip had started with a visit to Dusseldorf to watch Fortuna Dusseldorf v Wolfsburg on the Friday Evening.  Read Part One here.

For the Saturday we had decided to go to Mainz who were facing Hertha Berlin.  Whilst many ground-hoppers we met over the weekend had chosen Borussia Dortmund v Leverkusen (a match which was to finish 4-0), we wanted to try a new experience.  Whilst Mainz is more easily accessible for a weekend in Frankfurt, the thought was that a train journey of just over 2 hours on a Saturday morning wouldn’t be too bad.  We had forgotten that part when we ordered a bottle of Delirium at 2am following the Dusseldorf match.

Arriving into Mainz approximately 1pm, we had time to have a quick walk around the town.  We found it very friendly.  Outside the main Hbf there were representatives from the football club engaging with fans and directing people like ourselves to the buses which would take us to the Mainz Opel Arena.  These buses are free and included as part of purchasing your match ticket.  It’s a quick 6-7 minute transfer and the buses drop you close to the stadium, just a 5 minute stroll across a field to get there. 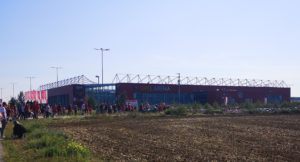 A short walk to the Mainz Opel Arena from the bus drop.

On the walk to the Mainz Opel Arena we passed dozens of these “bottle shops” which are a common sight in Germany.  If not setting up a stall, then you will see people scavenging with carrier bags for the same reason.  This is all part of the countries recycling scheme where recycled bottles can be worth up to 25 cents.  Whilst this was very evident at this venue, now I am aware of the scheme, I see it everywhere I go in Cities across the country. 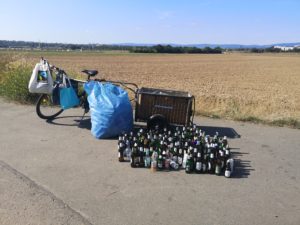 Bottle collectors set up “shops” to take your empties in an attempt to make money from the German recycling scheme.

The Mainz Opel Arena is a nice view on the approach, more so on this occasion due to the bright sunshine.  There were nice areas outside the stadium to sit and have a beer and we regretted not arriving at the stadium sooner. 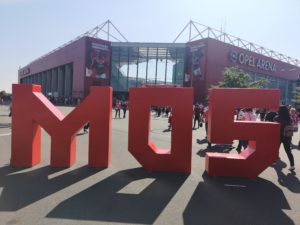 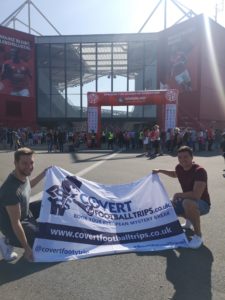 As you would expect, getting into the Mainz Opel Arena was efficient and inside the ground was ample space to move around and grab refreshments.  As with most German grounds you can take your beers to your seat or standing area.  For this match we were located in a standing area behind the goal. 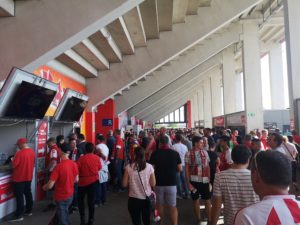 Inside The Opel Arena, Mainz 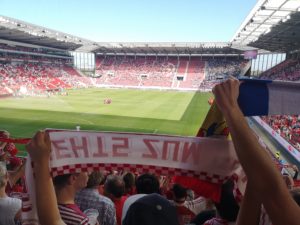 View from our seat behind the goal.

Mainz have been in The Bundesliga for 10 successive years since the 2009/10 season.  They play The Narrhallamarsch carnival music when a goal is scored.  However, like many German clubs, the match was preceded by a rendition of You’ll Never Walk Alone.  An immediate list of clubs which spring to mind who also do this are Borussia Dortmund, Kaiserslautern, Paderborn, and St Pauli – now add Mainz to that list. Whilst I am sure each set of fans believe this is their song, it’s a shame that they don’t all adopt something original to set themselves apart.

As kick off approached I was tapped on the shoulder by a lady who was passing along a bag of shredded paper.  I took some and passed it along the line, and knowing that this was going to be used imminently I placed my beer on the floor.  The beer cup, using our official ratings, scored a 3/10 as was not the most sturdy, offered no handle and was not part of a collectable series which many other clubs offer. 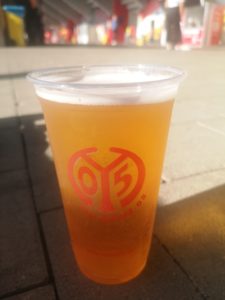 Seconds later the signal came to launch the confetti and as everyone did so, it created a very comical and happy scene amongst the fans. 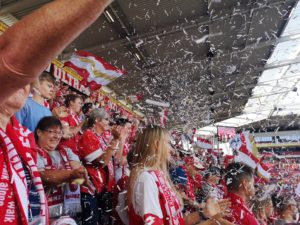 Fans launch shredded paper to signal the arrival of their team. 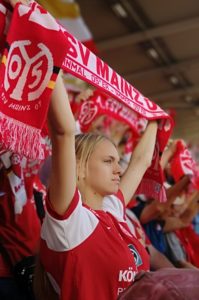 The match itself finished Mainz 2 Hertha BSC 1 with a late 88th minute winner for the home side.  That followed what had looked to be a draw for Hertha who had equalised after 83 minutes.  It was great to witness the relief and joy on the faces of those home fans who had suffered four defeats leading up to this match including a 6-1 battering at Munich the week before and found themselves bottom of The Bundesliga.  At the time of writing this, Mainz sit 4pts above the relegation play-off position in the Bundesliga Table.

On leaving the ground we noticed a string of taxi’s right outside the arena so headed towards those rather than using the free buses, this cost just a few euro’s and we were back inside the Hbf before most fans had left the ground.  On the train back to Dusseldorf we realised just what a nice journey it was, with views of The Rhine and castles along the route (where signal permitted we were able to watch bits of the Premier League match where Norwich shocked Manchester City with a  3-2 win).

This was a really enjoyable day out at what I noted as a very family and friendly club.  In the days leading up to the return of The Bundesliga, as fans in the UK chose their team to follow, we became aware that Mainz and Watford have been twinned cities since 1956 and from a neutral fans perspective, very similar clubs too.

Our next visit we will arrive a little earlier to enjoy the experience around the ground. 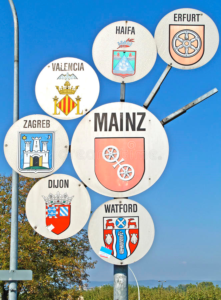 Mainz are twinned with many places, including Watford.

Next Friday:  Part 3 of our German Weekend – a trip to Bochum!