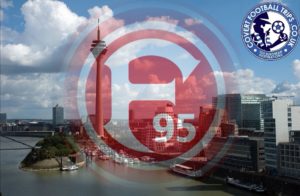 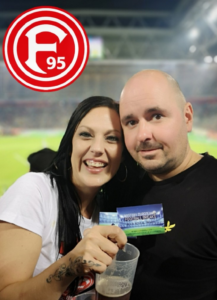 Other fans from the UK watching Dusseldorf v Wolfsburg

Our trilogy of matches start with a trip to the Fortuna Dusseldorf Stadium.  As with most football weekends, when planning in advance to take advantage of low cost flights, you have to be prepared for matches to be moved for television.  This weekend was to be no different.  Having booked flights to Dusseldorf from London Stansted for the Friday for just £16.99 each, we were well on course for a quality budget trip, with an evening of casual drinking planned.  However, that all changed when the Fortuna Dusseldorf match was moved to the Friday night.

All of a sudden, all eyes were on the flight times.  The flight to Dusseldorf (Weeze) was scheduled to arrive at 16:30 however the train journey into Dusseldorf Central was to be another 1h 42 mins.   This by our own standards is cutting things fine so we looked at other options.  It suddenly dawned on us that getting to Cologne may be a better option, being bizarrely closer to Dusseldorf – a quick check on the app and hey presto there was a flight to Cologne.

Now, we all like to do these trips on a budget, however an extra fifty notes on a new flight would allow two cabin bags (which we didn’t have booked previously and would give us a further time saving) plus a shorter train journey so it suddenly seemed worth it.  After little thought we booked the 14:20 FR2352 flight to Cologne due to arrive at 16:45.  Fortunately on the day all flights were on time!

We’ve all heard the term “It’s a small world” and that couldn’t have been more true as we boarded the virtually empty train from Cologne/Bonn airport to Dusseldorf.  On sitting down we decided to chat about the weekends matches we were to see (this is the first of a weekend trilogy).  As this happened a young chap leaned over from the seat behind interested to know which matches we were heading to.  He told us that he was living/working in Germany and was on the way to visit his girlfriend however was originally from Norwich.  As we advised we came from Norwich also, another chap about 10 rows down the train decided to jump up and state “Hey, I’m from Norwich too”.  It was spontaneously funny, and it really didn’t matter, but randomly here were 3 groups of people all from Norwich all who had boarded at different places all from little Norwich.  Following an efficient bag-drop at the hotel we had time for a couple of beers before heading to the ground.

We were staying in the City Centre (something we look to achieve for all Covert Football Trip customers) and headed to Hausbrauerei Zum Schlussel which is a pub located bang in the centre of Dusseldorf and where many home fans congregate. The venue on a match day can look busy on arrival however it caters for 440 seats and the service is incredibly quick.

Zum Schlussel is one of six pubs in Dusseldorf which brew on site and they will serve small 0.25l measures of beer yet do not despair, before your glass is empty another will be placed in-front of you.  A tally is kept with pencil marks added to your beermat – just place this mat on your glass to stop more arriving and to pay your bill.  They also serve take-away bottled beers should you want to lubricate your lungs on the train to the ground.  The beer served is the famous Dusseldorf Altbier, a coppery style beer unique to the region, it’s what everyone drinks as opposed to Pils. 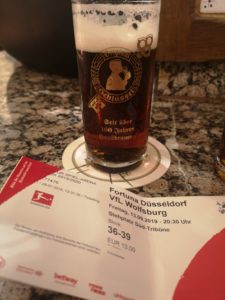 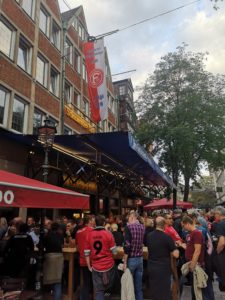 Getting to The Merkur Spiel Arena

We found timing of getting to The Fortuna Dusseldorf Stadium, named The Merkur Spiel Arena, extremely easy.  Just follow the crowds leaving the brewery and head to the U-Bahn which conveniently was just across the road (U-Bahn Heinrich-Heinne-Allee).  We were able to board the U78 train instantly, although perhaps it was the last train which would arrive ahead of kick-off as it was like the London Underground during rush hour.  The journey took approximately 20 minutes.  Moving your arm to take a swig of altbier was almost impossible due to how packed in we were.  The train dropped us straight outside the stadium and when we arrived we found the searches and ticket inspection very efficient with no delays getting in at all.  The outside of the multi-use stadium isn’t much to look at, so just a quick snap here.  It’s worth noting that like many stadiums outside the City, there is little to do in the vicinity so staying in the City Centre is what most supporters do ahead of the game. 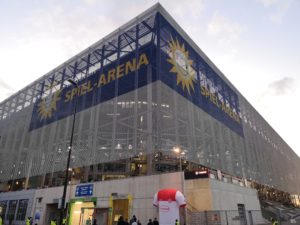 Inside the Fortuna Dusseldorf Stadium, it appeared we were one of the last to arrive.  Our tickets were standing behind the goal in the famous Sudtribune where the Ultra’s congregate costing just 13 Euro which had arrived as paper tickets in the post well in advance of our trip.

As we walked in it was evident that most standing spaces were occupied already so we continued to climb the central stairway, up and up until we reached the back row where we excitedly spotted standing spaces.   How fortunate – that was until a person who we won’t name, who we got to know quite well in the end, standing on the end of the row put his leg out to block our path.  It turns out that this is the row for his group.  However, after a quick apology for attempting to enter their territory the mood changed as we were welcomed in by half of them, turning on their own who had failed to be in place ready for kick-off – something very important to Ultra Groups in Germany.  It was quite awkward when those arriving late were turned away ten minutes into the game.  There were more than a few words exchanged between many of the Ultra’s but we retained our position.  After this beers were bought for us and we returned the compliment. 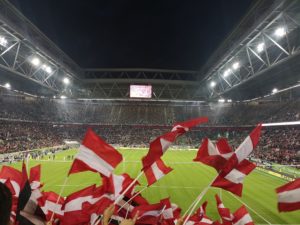 Whilst the Fortuna Dusseldorf Stadium is one of the largest stadiums in Germany, currently the 8th largest capacity with 54,600, it also boasts a massive support.  That, tied in with the clubs promotion just two years ago back to The Bundesliga , the ground was one of the best atmosphere’s that we have experienced in Germany.  A variety of songs dominated proceedings as you expect with flags flying throughout.

The match itself was reasonable enough.  Fortuna took the lead after just 16 minutes through left-back Niko Giesselmann which was eventually given after a VAR enquiry (the first we had witnessed in Germany) with Wout Weghorst equalising on 29 minutes for Wolfsburg with a tap-in.

One great thing we found on this trip was that unlike many clubs in Germany where you have to purchase credit on a card before making purchases, you could actually use your own debit card making it a seamless process.

If you’re heading to a match at the Fortuna Dusseldorf Stadium, then wear colours.  It is normal for fans in Germany to be decked out in club colours, just a scarf will make you feel underdressed (which is what we wore).  For good information on the club check out Chris who runs UKFortuna on Twitter who posts useful information too (as heard on Talksport this week)

Following the football, if staying in Dusseldorf for an afternoon or evening, we recommend trying out the Embankment Promenade filled with river-facing bars and restaurants. You will find that in Dusseldorf there is a large choice of beer so why not try them. On many menu’s you will see “Banana Weiss Bier” which has a very long and distinct aftertaste. 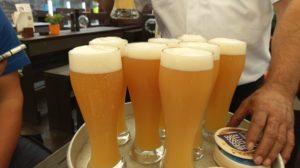 This was the first match of a weekend trilogy before heading on to Mainz and Bochum .  I hope you have enjoyed reading.  Dusseldorf is just one destination you could find yourself when booking a Covert Football Trip.  For all enquiries please email [email protected]

Part 2 of our weekend will continue with our trip to MAINZ next Friday!