Football Trip to Bochum – Part 3 of our weekend. 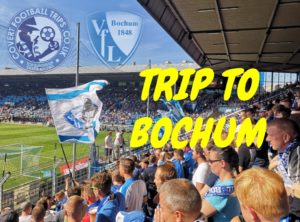 A Football Trip to Bochum at The Vonovia Ruhrstadion hadn’t even been on our radar however as we had a late night flight home on the Sunday night we had a search around to see what we could fit in to create the trilogy, and this worked out perfectly.  This was a far simpler 40 minute train journey from Dusseldorf.

Tickets were easy to obtain via the club website and cost just 13 Euro.  However a few weeks before we travelled we saw that tickets were still available for away fans on the Dynamo Dresden site so took the opportunity to purchase tickets for the away end too costing just another 13 Euro each.

On arrival at Bochum’s main railway station we simply hopped onto the U-Bahn which drops you right outside the stadium.  The beauty of the stadium made us edge towards it immediately however my arm was tugged and we turned right to find a beer.  Just yards away we stumbled across the quite brilliant Ritterburg beer garden where we were able to easily purchase draft beer and drink in the vibrant courtyard. 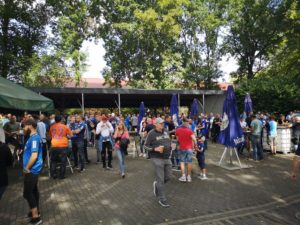 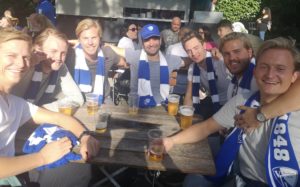 There were many sets of ground-hoppers at Bochum.

Before heading into the ground we thought we’d take a walk around the stadium, the angular structure was impressive and extremely photogenic.  Police horses occupied the end close to where the Dynamo Dresden fans would approach the stadium to direct them to the away end.  Before the Ultra’s arrived in their hundreds, we mingled with the Dresden fans outside the stadium who happily mingled themselves with the odd Bochum fan who found themselves in the same area.  We grabbed a beer from one of the small kisoks offering draft – the beer cups scored as a 5/10 – see our Beer Cup Scorecard.

Again, on this football trip to Bochum we witnessed bottle collectors scavenging the area, see report on our visit to Mainz for more about this, one in particular had sensors like a nocturnal predator – there was a chink in the area behind us where someone had dropped or kicked a bottle, the man turned instantly and then with enlarged eyes he raced quickly in a stooped manner as he expertly recovered the bottle and placed in his plastic sack. 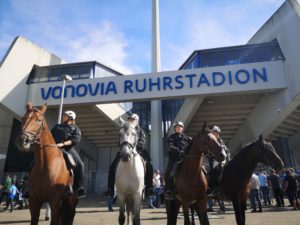 Police Horses wait outside the Vonovia Ruhrstadion for the arrival of Dynamo Dresden fans. 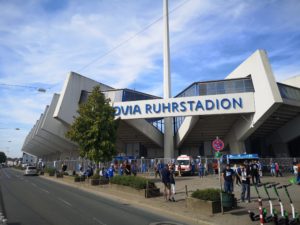 The Vonovia Ruhrstadion has a capacity of 29,299 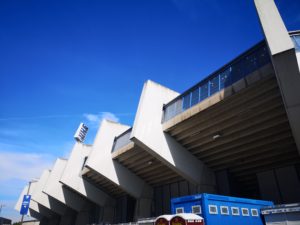 Take in the unique design of The Vonovia Ruhrstadion. 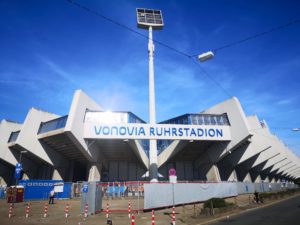 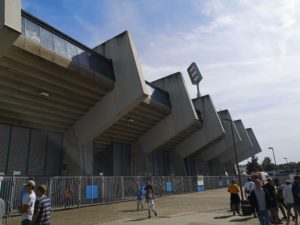 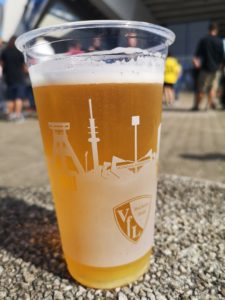 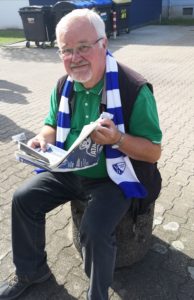 Bochum fan outside The Vonovia Ruhrstadion before the match

Going into this match Bochum had lost three and drawn two match therefore finding themselves near the foot of The Bundesliga 2 table.  Meanwhile Dresden entered the game on the back of two draws and two wins (one in the DFB Pokal). Due to having match tickets for each end we had been unsure on which half to spend in which end, however watching the Dresden fans march towards the ground and into the away end made our decision, we tagged along with them and entered.  As we approached the stairwell we were able to purchase some DD stickers for just 1 Euro which we were pleased to get hold of. 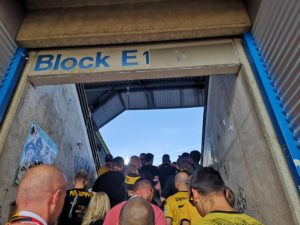 Inside the Away End was noisy, vibrant and packed full.  The singing had started long before we rose into the stands, scarves were aloft and we took in the atmosphere. 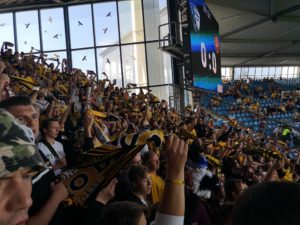 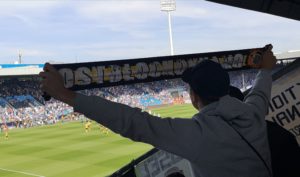 Picture from the Away End at The Vonovia Ruhrstadion. 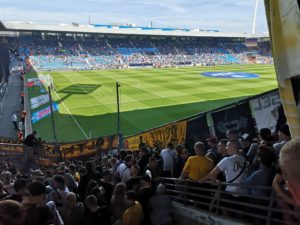 Dresden fans filled the away end.

At half-time the score was 0-0 and we used this time to leave the stand and walk round to the Bochum end where we let in as we showed our next match ticket.  Being late to arrive we had a short queue for a Pretzel and whilst still digesting this something happened – there had been a goal and we’d missed it.  Dynamo Dresden had come straight out in the second half and took the lead in the 46th minute.  This goal naturally encouraged us and others to get straight back to the stands.  Soon after, in the 63rd minute, Dresden doubled their lead with a goal from Kone.  Clearly we had opted for the wrong end to be in during the second half – or maybe not….

A 79th minute goal for Blum gave Bochum hope and then in the 85th minute Losilla scored a dramatic equaliser to lift the spirits to what some would say was almost a carnival atmosphere. 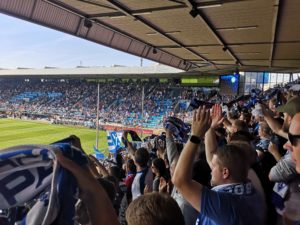 Bochum fans celebrate as they equalise 2-2 against Dresden.

After the match we headed back to The Ritterburg for a couple of beers.  It was quite busy yet easy to obtain a seat and enjoy our last piece of Germany before flying home.

This has been the third piece from this weekend.  Read about our trip to Fortuna Dusseldorf and Mainz which preceded this match.  Of all three football stadiums, the football trip to Bochum is the one that stands out the most and undoubtedly we will return to experience more of Bochum itself.

Next Friday we will share our trip to Hertha Berlin!