How do the quality of beer cups differ from Stadium to Stadium?

A Stadium Beer Cup Score-Card is what we have all been waiting for, right?  On our football trips around Europe it has become traditional for us to scrutinise not only the beer itself, but the containers used.  There is now such a range of beer cups that we decided to create an official beer cup score-card so that we could be clear how good each stadium’s cups were.  We came up with 5 clear features to help judge how good a Stadium Beer Cup is.

We first did this back in January on the back of a trip to Olympiastadion, Berlin, where we agreed that the lack of a handle was a fundamental flaw which is available at other stadiums.  However we have assessed so many cups already and not found a 10/10 and that was because we set the benchmark too high – a 10/10 had been a glass and that’s not going to happen easily!  Therefore we ripped it up and started again and we are here to talk you through that chart…

We conducted a recent survey and found that many of the main features were fairly evenly split when it came to importance – therefore whilst in my personal opinion the handle was the God of a beer cup and was initially going to be the only route to a high score, we have now adapted this and made each area much more even

Each of the following categories are now scored separately with a total giving you a final mark out of 10.

Below is how to score each section:

Unfortunately those beer cups made of plastic which immediately contract when you hold them still exist.  You know the ones, you pick them up and a few centimetres of liquid is squeezed out of the top wasting much of the beer.  Designed for use at a garden party or youth club these containers scream Asda 20 for £1.  These score 1 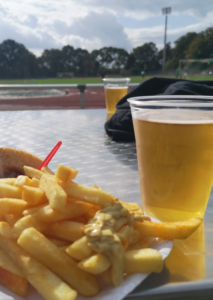 Then come the plastic cups which can still be scrunched up in one hand but are sturdy enough to hold in one hand whilst consuming the beer.  These score 2 points

Finally we have the real beer cups we are looking for.  Rigid containers which cannot be squeezed at all, they will fit into your suitcase on your trip and make it home in one piece.  Those are worth 3pts.

The design actually (and many would say unsurprisingly) came out as one of the most important elements of the beer cup.  We have awarded up to 3 more points in this category for the Stadium Beer Cup Score-Card.

A design can be something as basic as a logo.  So, if a club just state their name, or a basic image of a football that counts although doesn’t score highly,  A logo of the beer make, or of the cup manufacturer, does not count as a design.  If the cup is completely plain then zero points are scored.  So just a club name or logo is worth 1pt 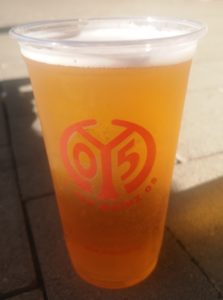 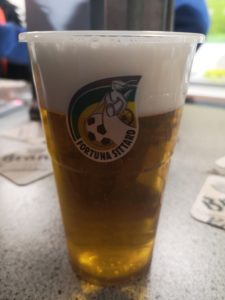 Again, Fortuna Sittard only include a logo and therefore can only score 1pt in this section.

Below we have a beer cup from Bochum who have gone as step further both with their club logo and the stadium image making it worthy of more than the one point.  The fact that the image is only one colour means it cannot score top marks on this occasion.  Worth 2pts 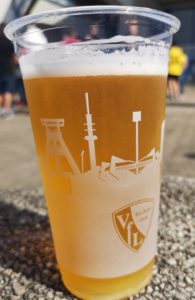 The maximum points available on the Stadium Beer Cup Score-Card in this section is three and this St Pauli Cup shows us the next level.  We have full colour and an image of one of the players screaming “DRINK ME” and the passion fans want to see etched on their cup.  It’s vibrant and in line with the club colours.  This quality of design is worth 3pts 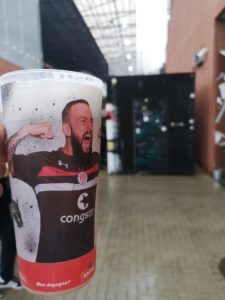 This type of design from St Pauli is worthy of 3pts

Simply put, is the beer cup up to date, or is it showing last seasons squad players who have since moved to another club or have the same cups just been used for multiple seasons.  As fans we want to see new merchandise.  If your cup is new and modern for the current season then  its worth 1pt on your Stadium Beer Cup Score-Card.

A beer cup may have immense design quality and should rightfully score a maximum of 3pts.  However a football club which offers a collection for consumers via a series, such as this effort from Hertha Berlin, has to be worth another 1pt on your Stadium Beer Cup Score-Card.

In this example, the Hertha Berlin Cup has so far scored 8 points from the 8 available…. 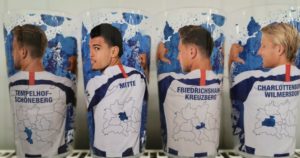 A series of Beer Cups are often available in stadiums. 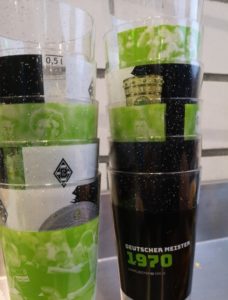 Borussia Monchengladbach are another club to offer a series of beer cups to collect.

Finally on the Stadium Beer Cup Score-Card system, we have the issue of a Beer Cup Handle and something I personally desire on a modern day beer cup.  If there is no handle there are zero points available.

Then we have two types of handle.  Some beer cups will offer a handle perfect for holding a beer during the match however they may be solid handles and have no method of stacking neatly.  These are worth 1pt.

And now the pièce de résistance – the beer cup with a handle and stackability!  Yes you know how brilliant this design is when you have had 4 beers during the football, grabbed 4 cups from a friend and before you know it, you have the first eleven squad members ready to be taken home but that can prove tricky – unless you can stack the beer cups together inclusive of the handle – also allowing these to be perfectly fitted into your return suitcase too.  These beauties are worth 2pts.  Watch our short video here demonstrating the perfect stackable handled beer cup!

A bonus half-point may be available at some clubs.  At Borussia Monchengladbach they offer a free beer carrier for taking multiple beers to your seats or stand.  This, whilst helpful on the walk, doesn’t eliminate the holding of the cup and therefore this additional feature simply boosts a clubs score by 0.5 on the Stadium Beer Cup Score-Card making the above Monchengladbach Beer Cup a great 8.5. 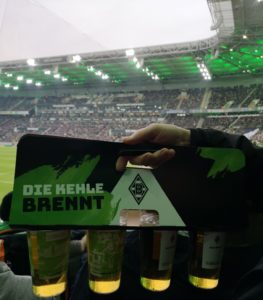 This Beer Holder allowing easy carrying of multiple beers offers a 0.5 increase to any clubs score.

This St Pauli Cup is therefore the first 10/10 we have scored.  Maximum points in each of the above areas – including that stackable handle!  We have compiled a short video here so you can take a closer look at this and some 8/10 cups too! 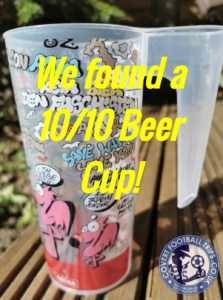