Speaking to many people who are relatively new to following Bundesliga football it would appear that whilst most people have heard of the 50+1 rule, there isn’t a full understanding of it.  That’s to be expected. 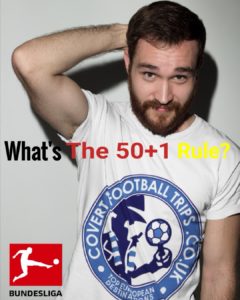 On our twitter feed, in the build up to the Bundesliga returning, we saw lot’s of new followers of German Football adopt a Bundesliga team.  Amongst the hoards that selected Dortmund, Munich and even Paderborn, some opted for RB Leipzig and they may have been surprised by comments they received back.

In 1998 The DFL changed regulations which allowed clubs to switch from their previous, not-for-profit organisation set-up which was run by voting members, to limited companies looking to gain external investment.  This was when the 50+1 Rule was brought in – meaning that these private or commercial investors cannot own more than 49% of a club and that the fans cannot have major decisions made against their wishes. 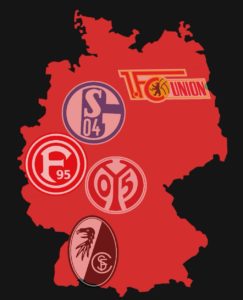 These 5 clubs remain as non-for-profit organisations.

How is this controlled?  Quite simply if a club breaks this rule they are prevented from playing in The Bundesliga.  This rule has been in place since 1998. The rule covers Bundesliga and Bundesliga 2, the top two tiers in German Football.

The 50+1 Rule applies to the top two tiers of German Football.

Really the most significant benefit of this rule, from the fan’s point of view, is affordability as ticket prices remain low.  This has a direct impact on attendances but also the right crowd, the REAL fans.  This generates the atmosphere which many English fans believe has been lost in our own top tier football.  In England where ticket costs have increased over time, it prices out many real fans from regular attendance and hence we have seen the phrase “The Prawn Sandwich Brigade” become commonplace.

It has logically been claimed in recent years that the 50+1 rule has prevented German Clubs competing at the highest level.  These allegations have only been heightened when you look at how poorly German clubs have done in European competitions recently.  In the 2018/19 season, Bayern Munich, Borussia Dortmund and Schalke all dropped out in the Champions League Round of 16 with a combined defeat to their three opponents over two legs of 17-3 which really highlighted this problem.

In the current 2019/20 season, Borussia Dortmund bowed out in the Round of 16 however RB Leipzig have made the Quarter Finals whilst Bayern Munich are on course to join them (being 3-0 up versus Chelsea after the 1st leg).  If those opposing the existing rule are to be silenced, further progression on the pitch will need to be made.

There are methods of overcoming this rule.  Bayer Leverkusen, Hoffenheim and Wolfsburg have all been able to apply for an exception based on their existing investors having been in position for more than 20 years.  The key point here is “apply”, it is still the German Football League who decide whether this exception should be granted.

So what is all the fuss which surrounds RB Leipzig?  Let’s first look at their short history.  In 2009 the Energy Drink company Red Bull bought the rights to fifth tier club Markranstädt.  Since then they have elevated through the leagues before reaching the promised land.  The football club was renamed as RasenBallsport Leipzig e.V (rather than Red Bull Leipzig as German rules state that a club cannot be named after it’s sponsor).  The club is owned 99% by Red Bull and 1% by the club – that club element hold 100% of the voting rights. 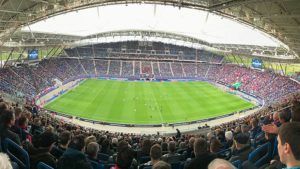 A large number of members make up the voting at most German clubs.  At RB Leipzig the voting rights are still with the members of the football club, although there are only 17 of them – all of them who are conveniently employed by Red Bull, the company who originally purchased the football club and make up the 1% of the club mentioned above.

Whilst this structure is not breaking any rules, it is scorned upon by opposing fans who see this as a direct conflict to how they want football run in their country, fearing an increase in commercialisation of the game and thus an increase in ticket prices.

In 2018 the 50+1 Rule was voted on again by all clubs in the top two divisions of German Football.  The 36 clubs agreed that the rule should remain in place.  However if the larger clubs such as Bayern Munich continue to fall away on the pitch versus their European rivals, further calls to remove, or adapt the rule, will gather pace.

If you enjoyed reading this, why not check out some of our recent reviews of football weekends in Germany including Fortuna Dusseldorf, Mainz, Berlin, Bochum and Nuremberg.