Nuremberg could be your German Team.

Nuremberg could be your German Team.

Nuremberg could be your German Team – that’s if you are still undecided on who to support now that The Bundesliga is returning.  Let us introduce Nuremberg – The Club and The City.

Whilst The Bundesliga will attract many new fans from the UK in the next few weeks with it’s imminent return, many will be looking towards the higher echelons to select a team to follow.  Borussia Dortmund seem to be the fashionable option for many….

The season resumes with Bayern Munich 4pts clear at the top with a healthy +47 Goal Difference and 55pts.  Second is Dortmund with 51pts and then its close with RB Leipzig on 50pts and the early league leaders Monchengladbach on 49pts, all having played 25 matches.  It’s certainly going to be an interesting climax to the season even if it is all to be played behind closed doors which is a debate for many fans.  Our Twitter Poll shows that 78% of fans will still watch it even if they don’t fully support the decision.

When you speak to ground-hoppers and ask what their best match experiences have been, it’s amazing how many people don’t speak of the teams above.  I hear Duisburg, Mainz, Schalke, 1860 Munich, St Pauli and of course our own team Nuremberg.  Whilst the teams at the top of the Bundesliga can showcase their star players and treat us to some quality football, I encourage you to look deeper.

Let us introduce FC Nuremberg.  This was the first football club we visited in Germany back in 2007.  On that evening at a Europa League Match versus Everton, the home fans were second to none.  The memory of 20,000 fans singing their anthem Die Legende Lebt and their choruses throughout the match made me realise what a special club it was.  In defeat their fans were gracious and welcoming.  Nuremburg had qualified for the Europa League by winning the DFB Pokal and eventually Nuremburg finished second in the group stages (behind Everton),beating the eventual winners Zenit in the process, however bowed out 3-2 on aggregate in the last 32 against Benfica.  Back then the stadium was sponsored as The Easy Credit Stadium.  I promised to return. 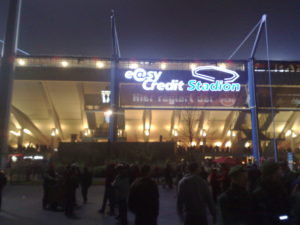 That promise took 10 years to deliver however on the 12th March 2017 we did go back.  Unfortunately the club had dropped into Bundesliga 2 at this point however that didn’t deter us as we picked up tickets for the match versus Bielefeld.  We were so looking forward to the match that I even learned the words of the anthem so I could get involved.   You are able to purchase beers easily and take to your seats (as with most German clubs) and on the continent you will find most ground have an area for safe standing rail seats as pictured here. 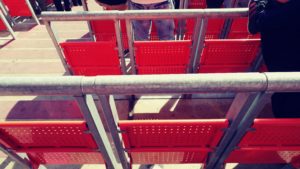 Seats and Standing rails at The Max Morlock Stadium, Nuremberg.

Whilst the Max Morlock Stadium doesn’t fill to capacity at the moment, it is easy to enjoy the experience by purchasing a ticket in the safe standing area behind the goal costing approximately 14 Euros which is the busiest area for fans and where the Ultra’s congregate.  For those using this as a reference for purchasing tickets, it is the North Stand. 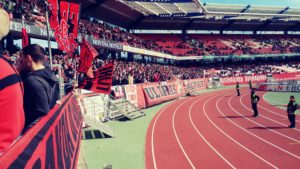 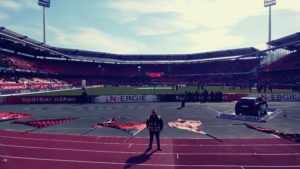 Watch the Nuremberg fans sing Die Legende Lebt before their match versus Bielefeld.  It’s goosebumps all the way and a tune you won’t get out of your head.

Now back to present day and whilst under normal circumstances a Bundesliga 2 match would normally attract smaller crowds and therefore a lack of atmosphere as a comparison, with matches behind closed doors each club is on an equal footing from that perspective.

As things stand Nuremberg sit 14th in Bundesliga 2, that’s 4pts above Wiesbaden who occupy 16th which is the relegation play-off position.  The playoff is basically a two legged match between 16th and the 3rd placed team in Bundesliga 3 which Nuremberg will be hoping to avoid whilst 17th and 18th are automatically relegated (those two teams are just 1pt further behind).  If it’s excitement you are looking for, there will be some tense matches to follow for sure!

FACT:  Nuremberg are the team most relegated and promoted in Bundesliga history.  The term used is “Fahrstuhlmannschaft” – an elevator side!

One thing for sure and that is Nuremberg, known officially as 1 FCN Nurnberg, is a big club.  Their Max-Morlock Stadium has a 50,000 capacity, hosting a match during the 2006 World Cup and is ready for it’s place back in the big time.  In the UK we would recognise them as a Sleeping Giant like a Leeds, Nottingham Forest or Sheffield Wednesday who have fallen from grace.  Nuremberg were (and still) affectionately know as “Der Club” (The Club) having won 9 titles making them one of Germany’s most decorated clubs.

The Nuremberg kits are also striking, a deep red is their home colour and over the past year MandM Direct have been offering the previous seasons shirts at great prices – normally £15-£20.  Therefore you can easily attend the match fully kitted out. 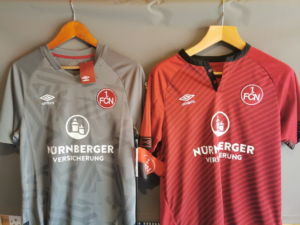 Matches in Bundesliga 2 are traditionally played on a Sunday afternoon whilst often at-least one match from that schedule is moved to an early Friday evening kick-off.  Nuremberg’s next match will be played on Sunday 17th May 2020 away to St Pauli. 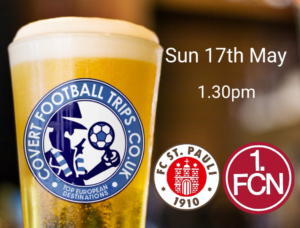 So what about Nuremberg City itself?

Nuremberg could be your German team, and don’t forget that one day, and perhaps on multiple occasions, you may want to visit your new chosen German club.  Nuremberg has it’s own airport whilst Munich Airport is less than a 2 hour train journey away too.  One look at Dortmund and you may suddenly realise that whilst The Yellow Wall is a fantastic experience, it really doesn’t top the pile when it comes to a city break!  In comparison, Nuremberg, the second largest City in Bavaria City offers so much.

The Altstadt (Old Town), is simply stunning – full of cobbles, architecture and timber framed buildings.  Central to this is The Castle, which offers a great view across the City  and the famous Albrecht Durer’s House, the home of the famous artist. 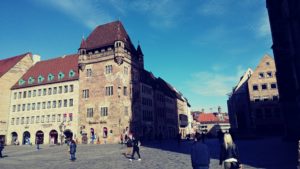 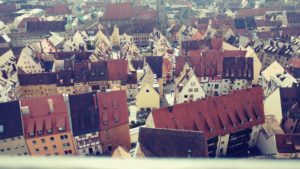 Nuremberg could be your German team if you enjoy good beer too.  The city is home to 20,000 square metres of tunnels running beneath your feet from the Middle Ages when over 40 breweries would cut their cellars out from sandstone which were eventually joined up and today still act as storage for the famous and gorgeous RotBier.  Rotbier is the local speciality and as the name suggests is a Red Ale.  At 5.5% it was perfect to sink a few at the Hausbrauerei Altstadthof, where you can also enjoy traditional dishes. 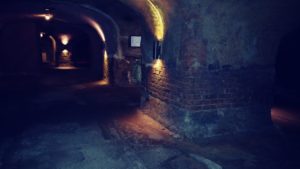 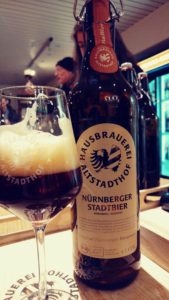 A visit to Nuremberg also allows you to visit some famous historical sites, none more so than The Documentation Center Nazi Party Rally Grounds.  This is where the National Socialists held their rallies between 1933 and 1938.  Then there is Courtroom 600 where the high ranked Nazi’s were brought to justice between 1945 and 1949.  A fantastic museum and fascinating experience. 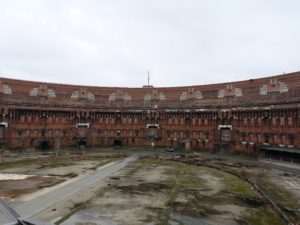 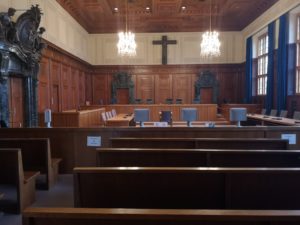 Nuremberg is an appealing destination in the Winter when the City comes to life with their famous Christkindlesmarkt (Christmas Market) which attracts one million visitors each year running from late November through till Christmas Eve.  Here you can enjoy and purchase traditional products such as the famous Lebkuchen (Gingerbread) and Gluhwein (hot spiced wine). 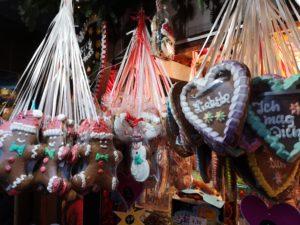 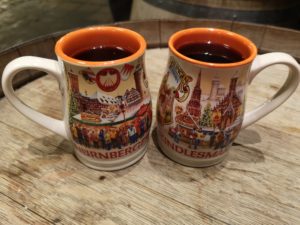 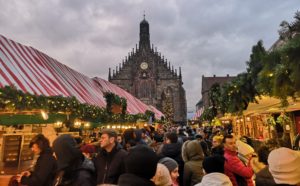 So Nuremberg could be your German team – it is not only a fantastic, traditional football club steeped in history, it’s also a fantastic venue to visit and enjoy.  Will you tune into the next Nuremberg match?

Our Sporting Package could take you to Nuremberg when you book one of our Mystery Football Weekends.