Last October we visited The Mommsenstadion, the home ground of Tennis Borussia Berlin, like many we said that we had to return.  Following a missed opportunity a few weeks ago when their match versus Tasmania Berlin was postponed due to Covid, we managed to find a way to get back for this weekends match.

This match would be the 8th match in 25 days for Tennis Borussia Berlin as they play catch up following mass postponements earlier in the season.  This would certainly be a mid-table clash with the two teams alongside each other in the Regionalliga Table. 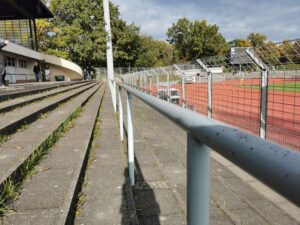 We were privileged to be invited to the club and spend the afternoon with Franziska Hoffman who is the head of the clubs Supervisory Board and we received a great insight into the club, helping us understand the clubs financial background which made the press in recent years.  Franziska is one of just a few women who hold this high position in German football and was impressive, explaining her role which has led the club back onto the right path.

We probably all think we know the Tennis Borussia Berlin badge, right?  What we had failed to identify previously is how the hawk pictured has changed – it’s now laughing!  This is just one of the positive things that Franziska and her team have done to create a positive club persona. 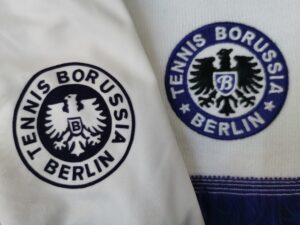 One observation in the second half was to see the home fans reach into their pockets for their keys every time TeBe would win a corner or freekick.  The jingles would start and progressively get louder as more fans join in a a build up to a potential goal-scoring moment

At the front of the stand we observed a bin with a basketball style hoop over the open lid.  Franziska happily advised us how fans take turns throwing their empty beer cups from a distance through the hoop.  This isn’t just a game though, as the fans are surrendering the deposit paid on the cup and these donations help the fan groups make purchases for the matchday experience, such as the purple confetti.  On some occasions a sign is displayed if the donations are to go to a specific charity that day. 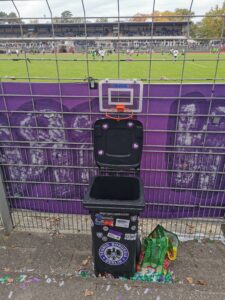 Fans throw their empty beer cups through the hoop.

Last year we created the Beer Cup scorecard and we naturally had to assess the beer cup at The Mommsenstadion.  We were pleasantly surprised with what we found – a sturdy cup with stackable handles which we haven’t seen since our trip to St Pauli.  The cup scored a good 6/10 using this matrix. 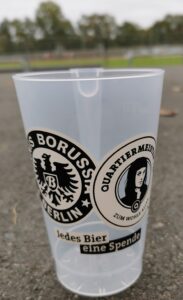 The match was an event with very few chances at either end.  The only goal came in the 36th minute which went to Chemie Leipzig. 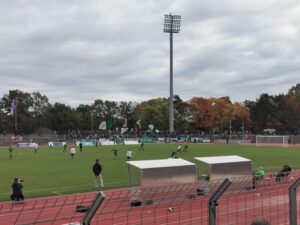 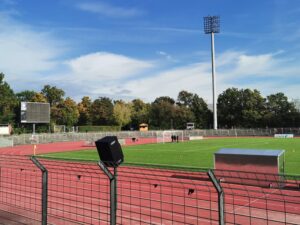 The walk to the ground

We have to be honest, on both occasions that we have visited TeBe we arrived via Uber so had not realised how close the local station is to the stadium.  Much is made of the forest walk to arrive at a Union Berlin match, so we were in for a treat when Franziska showed us the route home via the Eichkamp station – we really recommend this short picturesque walk.

The decision to return to The Mommsenstadion was justified, whilst the game wasn’t the greatest spectacle you will struggle to find a more welcoming club.  The club slogan “Come As You Are” really identifies what the club is about and what a great USP they have delivered.  After the match we stayed in the stadium for a further 2 hours drinking with TeBe fans, hearing great stories and learning so much about the club.  We really recommend a visit here.

Over the last 12 months it has been great to work with Tennis Borussia Berlin.  We have included tickets for the Corona Is Over match inside our Bundesliga Boxes which contain Mystery German Football Shirts, and also been able to supply many Player-Worn Jerseys from the club to.