St Blazey AFC play at Blaise Park which has a capacity of 3500 playing in the South West Peninsula League.  The last time I was here was somewhere around 1990 when on a family holiday I had attended a friendly between an Everton Reserve team and a Manchester United Reserve Team.  It had always been an intention to return.

With Covid continuing to impact Covert Football Trips we booked a trip to Cornwall and my attention turned to the St Blazey pre-season fixtures which were being announced and BINGO!  A match versus Exmouth was organised for Saturday 17th July. 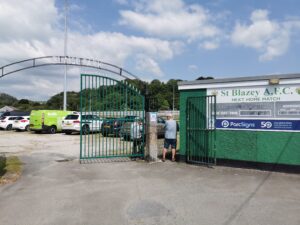 Just two days before the match however it was cancelled due to some of the Exmouth players having to isolate and whilst St Blazey issued a plea on social media for new opponents, it seemed unlikely.  Up stepped Saltash United Reserves and matchday was back on!

St Blazey play two leagues above their new opponents so this should have been a walk in the park.  The preparation of the two teams was starkly different – whilst Saltash appeared to be doing light ball work and stretches as a warm up, St Blazey were doing intense drills and exerting themselves in extreme heat.

The clubhouse was open and we were able to choose cans of either Carlsberg or Thatcher’s Cider for £2.50 per can and we took seats initially in the shaded stand before walking round to the opposite side of the ground to take a place on a grasss verge in the sun. 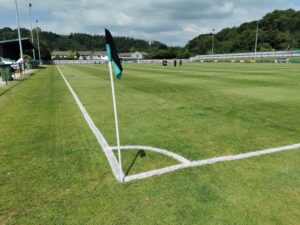 The sun-drenched pitch of St Blazey

For a pre-season friendly in 27 degree sun, both teams played as though something hinged on the result.  Good movement, determination and strong tackles were evident from the start and it was a good match to watch.  The first goal arrived just after the first drinks break with a goal from Jordan Dingle – a typical situation of popping to the toilet, starting to chat to a local and then missing the goal!

We didn’t miss the second goal which arrived early in the second half.  A good through-ball was latched onto by Callum McGhee – here is the strike…

Shortly after it was 3-0 with Callum McGhee strongly involved again, having been fouled in the box he stepped up to take the penalty which was well saved by the Saltash keeper.  Fastest to react was Callum Kenny to score the third.  The ball was squared across the goal and tapped home with the Saltash players claiming it was a forward pass however it appears the linesman was correct in allowing the goal to stand.

St Blazey looked so much stronger in the second half and many chances came there way.  Two headers sailed over the bar, one from a free-kick and one from a corner, the post was struck and the St Blazey attackers found the Saltash keeper in good form.  Pre-season rust, this game could have been a lot larger score-line.

The match finished 3-0 and this was an enjoyable return to Blaise Park.  This was a hot day and the players all put a big shift in.  The Manager afterwards gave positive praise to the players but demanded another 20% fitness from them between now and the start of the new season as he predicts stronger and fitter teams to arrive here.  Special mention to Harry Probyn on the right who has bags of energy and pace and whilst things didn’t go his way today, he will be a player to watch this season. 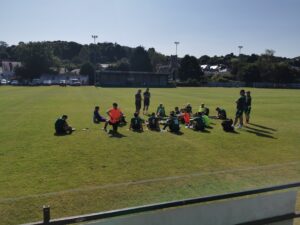 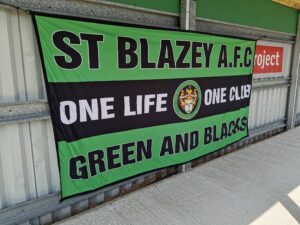 St Blazey are known as The Green and Blacks