This weekend we were able to complete a Plough Lane Match Day as we visited the clubs new Stadium as AFC Wimbledon faced Shrewsbury Town.  However there is much more to AFC Wimbledon and we have looked back at some of the history. 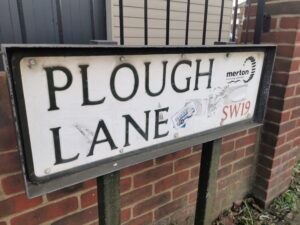 A Plough Lane Match Day was something I missed out on as a younger fan.  It was the rise of the Wimbledon team in the 1980s culminating with the 1988 FA Cup Final win over Liverpool, which remains a big memory of that era for me.  Teams would  struggle to deal with the poor quality pitch at Plough Lane and the physical game which Wimbledon applied.

That Plough Lane has unfortunately been buried in history.  Having played there since 1912, Wimbledon first moved to ground-share with Crystal Palace in 1991 before looking to relocate to a new stadium.  The original stadium location is marked with a sculpture which you pass when turning off Haydons Road onto Plough Lane.

The Wimbledon Crest is attached to one side of the artwork.

Often when we travel abroad we hunt out old stadiums which have become derelict – they generally sit there deteriorating and become places of interest for football fans, whilst the old terracing with overgrown vegetation becomes an Instagram paradise.  Unfortunately this is nowadays not the case for the original Plough Lane ground which was sold to Safeway Supermarket before being turned into a housing development.   However this article by ChrisFollows.com includes a video of how the ground was left empty and “frozen in time” for many years.

In 2003 after failing to secure a new stadium location, the club uprooted to Milton Keynes, rebranding themselves as MK Dons.  In the meantime AFC Wimbledon would be re-formed from a set of original Wimbledon fans who opposed the move and they started out their journey back to the football league from the ninth tier with five promotions in nine years.

Getting to Plough Lane

Travelling from Norwich we grabbed a train to Wimbledon which took us via Cambridge and London Blackfriars before arriving at Haydon’s Road Station just before noon.  With three hours before kick-off there was plenty of time to explore the area.

On arrival at the station, it already screamed Wimbledon with the railings leading up from the platform to the main road painted in bright blue and yellow.  Not since our recent visit to LOK Leipzig have we seen the club colours so much out there in the local community.

The new stadium was built on the site of the former Wimbledon Greyhound Stadium.  Back in October over 8,000 fans had watched AFC Wimbledon v Bolton and the attendance at this match was a good 7824 (credit to Shrewsbury Town who brought 838).

The stadium is made up of four sponsored stands.  The Ry Stand is on the East whilst The North Away stand is known as The Cherry Red Records End.  The West stand is called the Cappagh Stand whilst The South London Movers Stand completes the four sides.

On the way to the stadium we stopped off at Haydons Cafe, at 341 Haydons Road.  If you are looking for a fry-up pre-match we would really recommend this for good food and efficient service

Before the match we headed to the spacious club shop and we were amazed to find a beautiful museum hidden away showcasing the history of the club.  Whilst a large Uncle Bulgaria Womble dominated the room, a lovely experience for the children, the highlight was undoubtedly the replica FA Cup with those blue and yellow ribbons, the 1988 FA Cup Finalists shirt (my holy grail) and the flat cap which were all on display. 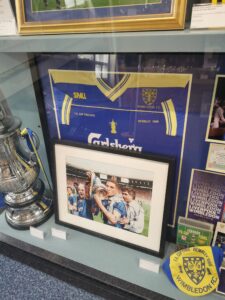 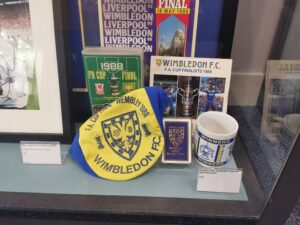 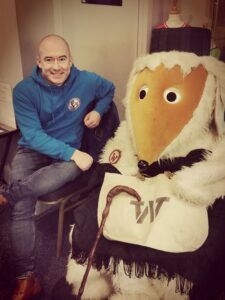 Womble costume in the museum.

We entered the ground via Plough Lane as we sat in The Cappagh Stand and we found the concourse extremely spacious.  Immediately ahead was a sign stating “The Phoenix” which looked like a pub sign.  We entered and went down some stairs…

The pub was nothing like we have experienced before at a football ground.  This was not just “a bar”, it had the feel and look of a Brewdog style bar and as well as serving the normal generic lager, there was Stout and IPA available.  However, what stood out was the beer name “The Crazy Gang” Pale Ale which we ordered. 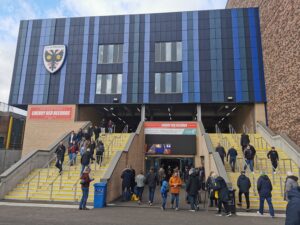 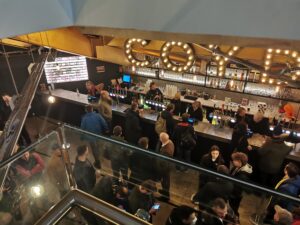 The Phoenix Pub inside the ground 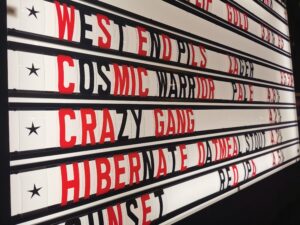 Inside the ground facing the Main Stand, the blue and yellow seating screamed Wimbledon.  We were situated in The Cappagh Stand which was accessible by Gate 2 on Plough Lane.  Our seats were in Row J and this offered an excellent view. 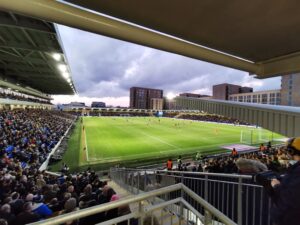 Our view from The Cappagh Stand 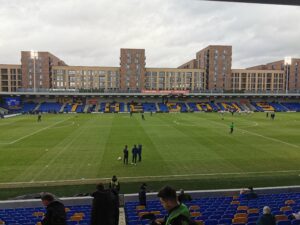 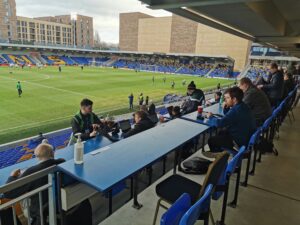 If you are looking for food before a match at AFC Wimbledon you won’t be disappointed.  This short clip shows the food area situated behind the stand with various options.

At the start of the day AFC Wimbledon occupied 20th place in League One having recently slumped to a run of zero wins from seven matches and the previous Tuesday night, another home match versus Ipswich ended in a 2-0 defeat.

This Plough Lane Match Day versus Shrewsbury Town was huge with the opposition just three points above in the league.  A defeat would leave Wimbledon precariously close to the relegation zone, whilst  at the same time a win for Morecombe over Accrington would actually see them slip into the bottom four.

Before the players emerged from the tunnel, the ground played what we believe is a traditional tune of “show me the way to go home”.  When the match was underway, at times the home fans behind the goal made good noise, and when this subsided it was the Womble Mascot clattering the litterbins orchestrating chants from The Ry Stand instead.

AFC Wimbledon didn’t take long to take charge of this game with the opening goal coming from Ayoub Assal after 13 minutes heading home a cross.  Daniel Udoh equalised for the visitors early in the second half however very few other clear cut chances saw the match end 1-1.

We really enjoyed the AFC Wimbledon Match Day experience.  If we were to return we would head straight to the ground as The Phoenix is a great addition, rather than having to hunt down a bar to eat and drink in.  We thoroughly recommend a ten minute visit to the museum inside the club shop too.

We hope you enjoyed this review.  Please do share!