A football weekend in Leipzig for many would be a trip to see RB Leipzig however we wanted to visit a team with a far superior history.  Our trip took us to to Lok Leipzig versus Tasmania Berlin which was scheduled for Saturday 16th October at 3pm and fell perfectly for us.

Going into the match 1.FC Lokomotive Leipzig sat menacingly in 4th place in Regionalliga Nordost and a victory would take them to third.  Going into the match LOK had won their last two matches at home 4-0, against TeBe and Halberstadt respectively whilst also winning at Chemnitz and Auerbach on the road and 4-0 away at ZFC Meuselwitz too.  Meanwhile their opponents, Tasmania Berlin, languished in 16th place. 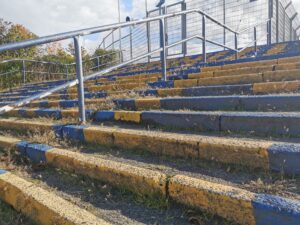 Stairs leading up to the ground

Getting to the Ground

If there is a ground with no complexity to get to, this is it.  The Bruno-Plache Stadium known to local fans as “Das Bruno” is a simple tram ride which we caught directly outside Leipzig Central Station, riding 12 stops for approximately 17 minutes and then a 5 minute walk. 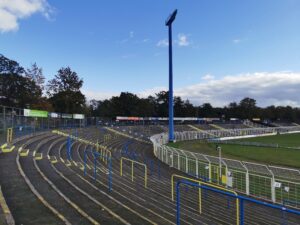 Entrance inside the stadium was easy.  The tickets which we had purchased on-line for 11 Euro gave us access to all standing areas of the ground.  Immediately inside the main entrance were several stands serving food, a bar and a fanshop.  Paying on card was not possible for food or drink, whilst the Fan Shop didn’t accept foreign debit or credit cards.  Not taking cash was a massive oversight, however fortunately there is a cashpoint 500 yards away from the Stadium so we left and returned with cash to continue our experience. 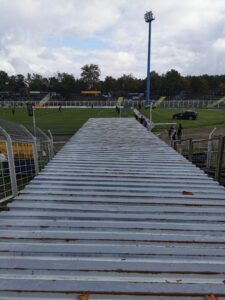 The Tunnel at Bruno Plache Stadion 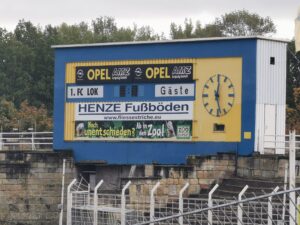 Scoreboard inside The Bruno-Plache Stadion

On this football weekend in Leipzig we found the beer quite expensive to what we are used to in Berlin.  Indeed even inside the stadium of  Lok Leipzig we found the beer was expensive at six euro’s per pint and at-least it was poured into a sturdy plastic glass and not one that crushes as you hold it.  The food was better priced and there were several options including Bratwurst and Currywurst and Chips for just 4 euro’s. 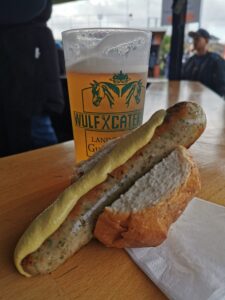 The first half had seemed fairly even, Leipzig had the majority of the ball but neither team was creating much in the final third.  Tasmania seemed more keen to pump the ball long whilst Lok had a more patient build up.

All of this changed in the few minutes before halftime.  Lok made the breakthrough in the 41st minute through Djamal Ziane with a simple header and the  in the 44th minute that lead was doubled through Theo Ogbidi with another close range finish. 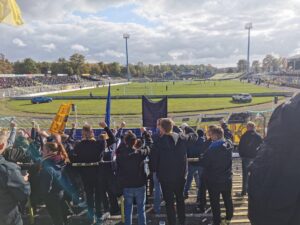 Lokomotive Leipzig fans behind the goal

Lok Leipzig didn’t look back and Tasmania didn’t recover, the second half was as comfortable as you will see a match as Tasmania seemed to accept defeat.  Ziane again nodded home to make it 3-0 after 55 minutes and then Tom Nattermann stepped up to score two goals to complete a 5-0 rout.  These three points see Lokomotive Leipzig jump to third place, one point behind second placed BFC Dynamo but with a game in hand, and just two points behind BAK who occupy the summit.

Before arriving at this match we were aware of the right-wing image of the club.  We didn’t want to use this experience to prove or disprove this, we simply enjoyed a great match and good relations with all the Lok fans who we spoke to.  To gain a better understanding of the history of the fanbase have a read of this article. 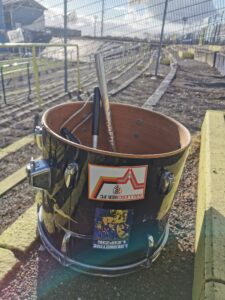 Where to eat and drink in Leipzig

There are many great bars in Leipzig however after the match we headed to Bayerischer Bahnhof which is Germany’s oldest preserved train station, now acting as a beer hall and restaurant.  A really great setting and where you can enjoy Leipzig’s own Gose Beer which has a very unique sour taste. 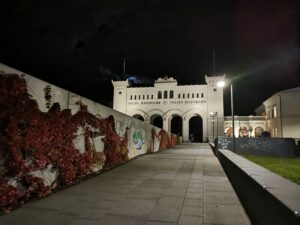