On Saturday morning we left Berlin and headed across to Hannover to see Hannover v St Pauli.  This was much more of a feisty encounter than we thought it would be and it helped to create a great atmosphere inside a partially full stadium.  Our train left Berlin at 8.19am arriving in Hannover at 10.28am giving us a three hour window before the match.

Getting to the Stadium

After spending the first hour locating a Covid Testing Centre and having a subsequent test for our flight home, we headed straight to the ground.  The HDI Arena is a half hour walk from the HBF and therefore we elected to grab a taxi from outside the train station.  Unlike Berlin there is no Uber in Hannover so we grabbed a cab from the rank and this cost exactly 10 Euro whilst we quietly (and with relief) celebrated the negative test results coming through on email as we approached.

We headed for a bar called Nordkurve which is a bar directly opposite the stadium and this is a Shirt Collectors dream with scores of Hannover jerseys decorating the venue. 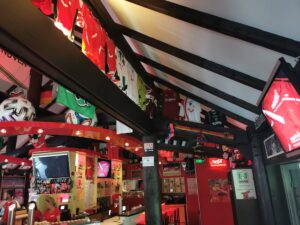 Nordkurve bar opposite the HDI Arena

It was very clear with the tickets that we needed proof of Covid vaccination and ID to access the stadium.  The stewards here were well organised and knew exactly what job they were doing and what checks were required.  Without any fuss they checked tickets versus the name on the ID whilst also checking in detail the vaccination certificates with the dates.

This is the second match of the weekend and again as long as you check what you need to access a stadium there are no issues.  A very good experience. 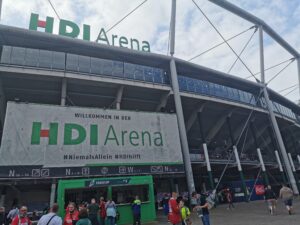 Inside the HDI Arena

Inside the stadium we found our seats in the North Curve directly behind the goal.  All spectators were spaced apart so there was one space between spectators. 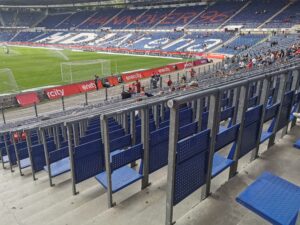 Safe Standing in the North Curve

Hannover v St Pauli had huge significance with the hosts starting the day in 17th place, whilst St Pauli following a good start to the season were flying high in 4th

Before the match Hannover fans were in full voice. 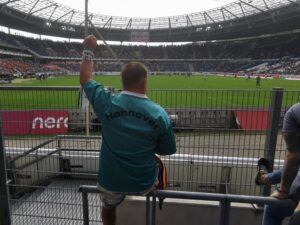 A Hannover fan watches from the North Curve

The match was an excellent spectacle with Hannover creating the clear chances.  In the 39th minute they had breakthrough as Sebastian Kerk tapped in and the joy was clear – Hannover fans knew the importance of this goal and a probable victory.  The final score was 1-0