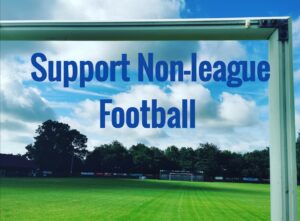 Support Non-League Football and get down to Wroxham FC.  That’s our message to local football fans as the gates open for a limited number of supporters on Tuesday Night in the FA Cup.

Why Go to Non-League?

Last week we completed a report of a match between Shanklin and East Cowes Vics on the Isle of Wight.  We don’t usually attend non-league, so why did we go?  Well, like many I hadn’t been to watch live football for 5 months and the fact that this was on the doorstep whilst on a family holiday made it easy to get to.  We normally travel abroad regularly for football weekends however right now that cannot happen easily either.

At the time of writing this article, we had just become aware of our latest European trip being at threat due to isolation being required from this Saturday when returning from the Czech Republic.  We had booked flights to Prague for the weekend of 3rd October (this after a Munich flight was cancelled and we had to switch city’s). The plan was to see Dukla Prague who are playing at home that weekend.  This just sums up the current climate out there and with weekends becoming more and more risky and capacities at UK grounds being restricted, it is time to look at other options – Non-League Football is right here, right now!

The match on Tuesday evening is an Extra Preliminary FA Cup Qualifier.  As normal it is a regionalised round to reduce travel costs, with Arlesey Town FC based in Bedfordshire 100 miles away.  This is the 1st of 12 rounds of The FA Cup and this is where the Level 9 and 10 Clubs enter the competition.  This is the first of six qualifying rounds before the first round proper starts in November. Surely it’s the dream to get that far.

Just after lockdown I took a bike ride out to Wroxham.  It’s a local club to me however I had never visited for a match and I couldn’t answer why.  On a warm Sunday morning I explored the empty ground and committed that I would support non-league football a little when spectators could safely return. 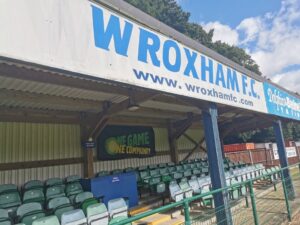 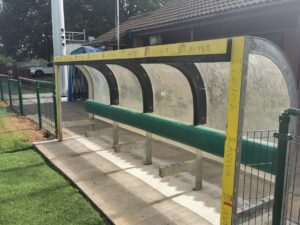 The bench at Trafford Park 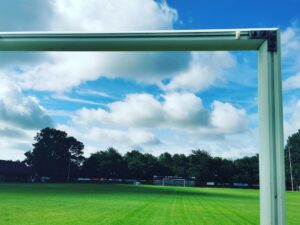 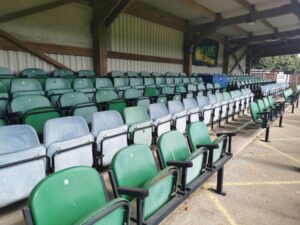 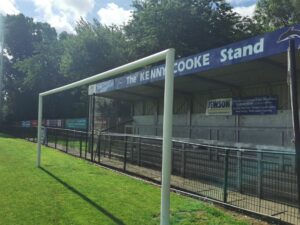 In the 2019/20 season Wroxham played Kirkley & Pakefield in the same round.  Following a 2-2 draw away from home, they won the replay 3-2.  However in the next round they exited the tournament losing 4-2 at Trafford Park to Stamford.  This year there will be no replays as FA Cup ties are all played to a finish, with extra time and penalties deciding the result if scores are level after 90 minutes.  This is a new rule for the 2020/21 season to ease fixture congestion due to Covid-19.

The Yachtsmen entertain Arlesey Town at Trafford Park on Tuesday 1st September with a 7.45pm kick-off.  We were monitoring the situation and were quick to snap up two tickets.  The football club twitter account stated that 100 tickets were sold in just 6 hours when they went on sale – but the club want all tickets sold.

As of last night tickets were still available and we encourage you to support non-league football.  If you are in Norfolk perhaps get down to Trafford Park on Tuesday.  Tickets can be purchased here from just £2 (Under 18s), £5 (Senior) or £7 (Adults).