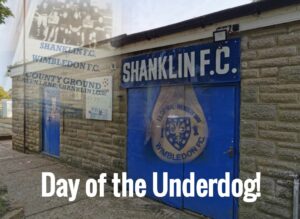 Being starved of football like everyone, I took the opportunity to take in a match this week during a family holiday.  Whilst we would normally hoping to be elsewhere in Europe (that’s coming soon!) we loved this opportunity to watch some lower league football in the shape of Shanklin FC in the UK.

Shanklin FC are an amateur Saturday league team albeit one of the largest clubs on the Isle of Wight.  This would be their second match following the lockdown during the Covid-19 pandemic.

Before attending I looked into the history of Shanklin FC and a fascinating story emerged.  Back in 1988 the islanders had agreed a pre-season friendly with Division One side Wimbledon known as “The Crazy Gang”.  Of course that was the year that the club from Plough Lane would shock the football world by winning the FA Cup against all odds versus Liverpool.  It was a feat no less remarkable than Leicester winning the Premier League.

Wimbledon kept to their promise, crossing The Solent to complete the fixture.  If this story wasn’t enough on it’s own it appears that Vinnie Jones was shown his traditional red card.  The result ended 6-0 to The Dons but Shanklin FC received massive exposure in the press.

As I entered the Shanklin Club House prior to Wednesday’s match, memories of this occasion, rightly so, are scattered across the walls and trophy cabinets. 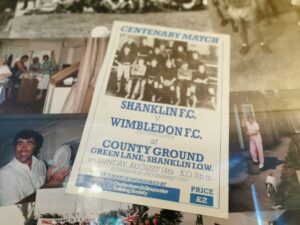 Behind the bar was a gentleman, Stephen Trowbridge, who is now the Club Treasurer.  It turns out that Stephen back in 1988 was a mere spectator who had been granted access to the after match reception with a friend.  He recalls many things from that day, which naturally drew the largest crowd ever seen at The County Ground as Shanklin FC celebrated 100 years since their inception.

A temporary grandstand had been erected to facilitate the additional fans however his greatest memory was recalling how Bobby Gould, the then Wimbledon Manager, was so angry at Vinnie Jones’ red card he furiously sent him to the bus in an exchange of expletives.  It had actually been Stephen’s now neighbour who had been the recipient of the Hollywood Star’s elbow – what a story it is for that guy to tell! 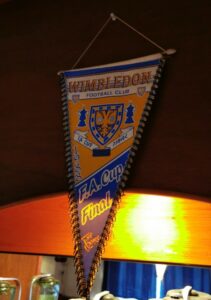 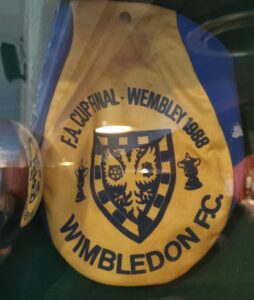 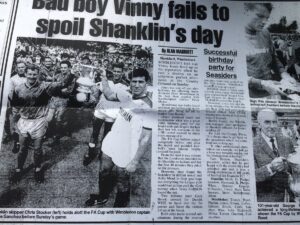 This had been a fascinating introduction to the history of Shanklin FC and with time left before kick-off I treated myself to a refreshing bottle of Doom Bar, after all the temperature was still 25 degrees at 6.30pm!

Getting to Shanklin FC

The journey to the Isle of Wight requires a ferry across The Solent, from Portsmouth to Fishbourne.  It’s a short 45 minute crossing but what a lovely experience for an away day!

There was a music track released by group Eiffel 65 in 1999 called Blue (Da Ba Dee) which basically says that everything is blue.  In fact Everton FC used to use it prior to matches in the early 2000’s.  The Blue of Shanklin was immediately visible as I stepped over the grassy verge from the carpark to see the bold club signage.  The nets were also blue and guess what colour kit they have?  That’s right. 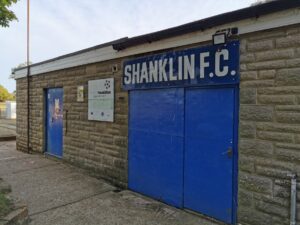 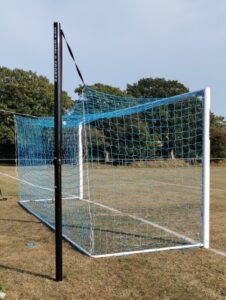 I had previously checked that fans could attend and watch due to the random Covid-19 regulations in place across parts of the football pyramid and as expected there were no restrictions here.  On the day of the match the kick-off was rescheduled to an earlier 6.45pm kick-off which I was informed about.

Shanklin FC play in the Isle of Wight Division One whilst their opponents participate in the higher Wessex League Division One.  Whilst an island team, most of East Cowes Vics matches are played on the mainland.  This was going to be a tough match for Shanklin.

The match was a friendly yet clearly from the kick-off it was going to be played with a competitive spirit.  Tackles were flying in and Pete Wilson wearing number 11 was hustling the East Cowes full back and spearheading the attitude which would ultimately see Shanklin FC win the match.

Shanklin took the lead after just 20 minutes.  Lyle Drew was brought down inside the box and the referee pointed straight to the spot.  Trundling forward from the back came number 4, Captain Iain Seabrooke who would take the kick.  He had already been winning meaty headers at the back but now had the responsibility to give Shanklin the lead.  Any doubts about the result of this penalty kick were over as soon as the ball left his boot, an accurate hard low shot to the keepers left rippled the net.  Indeed it appears that Captain Seabrooke has a certain reputation with a dead ball, in the second half when he lined up a free-kick, the optimism from the locals was evident believing that the odds were in his favour, the strike certainly went close.

Shanklin looked solid and were only threatened a couple of times.  On 70 minutes goalkeeper Jack Powell instinctively saved a nailed on goal as he thwarted a close range volley tipping the shot over the bar with a strong hand.  As East Cowes pushed forward one great piece of skill saw the eventual finish not so good.  Shanklin held on for a deserved victory.

Here are the highlights from the match:

We have to remember just how fortunate we are to be able to watch live football like this with many clubs facing financial uncertainty.  Shanklin FC are no exception to this.  The main income for the club is the clubhouse bar, the hiring of the clubhouse and players match subscriptions.  Shanklin FC also had their annual summer tournament cancelled snuffing out further income.  The club were fortunate enough to receive a grant from the IoW Council which has helped massively whilst grants from the FA helped secure the new goalposts and pitch preparation.

If you attend a match for free, I encourage you to spend.  Buy a beer, buy a hotdog, anything which can help these clubs continue to operate and offer fantastic evenings like this. 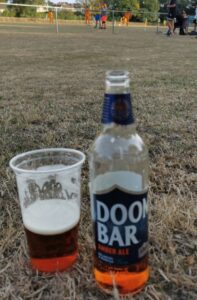 Every purchase helps the club you are visiting.

Like their 1988 visitors Wimbledon, Shanklin FC showed that the spirt and aggression of a team, so often lacking in the higher echelons of football, is how the underdog can prevail.  This was a great evening for everyone involved with the majority of people playing and observing, just happy to be back!

We are of course looking forward to our next trip abroad, if you fancy a football weekend with a difference then check out our Mystery Football Weekends which will be available again as soon as Covid-19 restrictions are widely lifted.