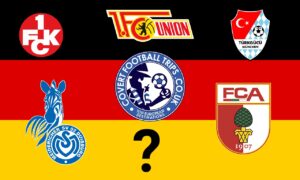 Having ticked off many Bundesliga, Bundesliga II and 3Liga Stadiums over the past few years, the key question is where next?  Everyone has their own bucket list of stadiums to visit, my own is 30 strong, so I have tried to narrow this down and with some determination commit to 5 which I will visit in the forthcoming season (amongst many others I’m sure).

When coming up with my list of 5 German Football Stadiums to visit, there is a reason behind them all which I will explain with each one.  Logically I should just visit each as they appear geographically, or perhaps start at the top and work down.  Where would the fun in that be though?

Augsburg had never been on my list of German Football Stadiums to visit.  However they have been like a jigsaw, little bits of them keep appearing on my timeline gradually fitting together, filling me with a desire to find out more.

In my quest to obtain some special football shirts from each German Football Club, I came across the stunning 2019/20 third shirt by Nike.  So often the final kit is the most desirable and this was no exception.  The Black and Red design was quickly added to my collection and shared on social media – it was great to see FC Augsburg interact and retweet this, again making me warm to the club.

I recalled in my recent blog regarding our trip to Stuttgart how the Augsburg fans intrigued me with their one-worded “Augsburg” chant and the great atmosphere they created in the away end at the Mercedes-Benz Arena.  The fans are another part of the jigsaw which has placed them in my top 5 to visit.

Being part of Bavaria, my most favourite region of Germany, it makes FC Augsburg a club I must visit too.  Being one of the countries oldest cities it would seem to offer many similarities to Nuremburg (my favourite German City).

The stadium itself is not something that I have looked into much, however I was surprised at the 30,660 capacity, which clearly is due to its very recent construction in 2009.  Having kept their place in The Bundesliga for another season finishing in 15th place I look forward to visiting soon. 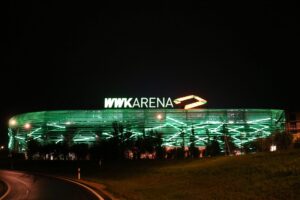 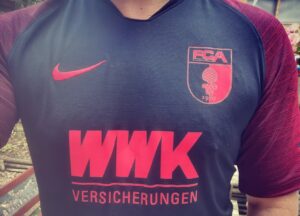 The Augsburg 3rd Shirt was an instant hit.

Why on earth is Duisburg on our list of German Football Stadiums to visit?

So, during the 2019/20 season, Duisburg were a constant part of our timeline.  Due to monitoring the important matches at all levels in Germany, Duisburg were part of a unique season which saw the top half of 3 Liga split by just a few points.  It was Duisburg who led the pack for much of the season thanks to a strong start however they finished poorly and eventually sunk to 5th – albeit that was still just 3pts from the summit.

The Zebra’s of course add an extra dimension.  That Zebra logo pulls you in like a comically named horse on Grand National Day.

However there is another reason to add Duisburg to our German Stadiums List, and that’s another trip to the Ruhr region.  Whilst Dusiburg is Germany’s 15th largest City and deserving of a visit in it’s own right, it sits amongst a host of other fantastic clubs allowing an easy multi-match weekend.  You will find Dusseldorf and Cologne to the South and Dortmund to the East.

Duisburg play at the MSV Arena which is another relatively new stadium built in 2004 and holds 31,500.  I have read many reviews of people attending matches at Duisburg who mention excellent fans and a superb atmosphere and this is extremely appealing.

Duisburg are known as Die Zebras (The Zebras) 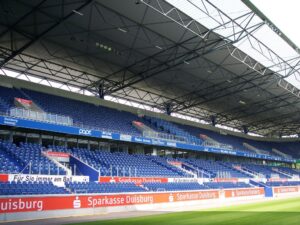 One of the pulls of Nuremburg for me was always a mixture of the stadium and their history.  That is very much why Kaiserslautern makes my list of German Football Stadiums to visit.

The unique build of the Fritz-Walter Stadium has been intriguing me for some time and it’s amazing that I have yet to squeeze a visit into any trip.  The structure reminds me of the San Siro as the columns and roof take centre stage.  Used in the 2006 World Cup it can hold 49,850 spectators. 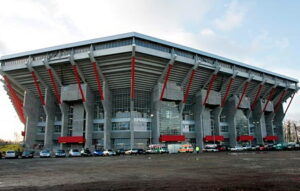 The amazing look of the Fritz-Walter Stadium

Kaiserslautern have a rich history however a sorry tale see’s them languish in the third tier.  Founder members of The Bundesliga, 1.FCK have been German Champions 4 times and as recent as the 1997/1998 season, temporarily pushing Bayern Munich into second place who were already commencing their modern day domination.  Kaiserslautern also won the DFB-Pokal in 1989/90 and 1995/96.

The history doesn’t stop there.  The stadium has a rich name too.  Fritz Walter was the star of Germany in the 1954 World Cup dubbed “The Miracle of Bern” (if you haven’t read the book “TOR – The Story of German Football”, add it to your list as this story is covered fantastically in here).

If you are interested in the recent history of Kaiserslautern and to understand why the club has fallen so far then have a read of this article.

The 2019/20 season marked the debut of Union Berlin playing in The Bundesliga having beaten Stuttgart in the play-off.  If that wasn’t a highlight enough of it’s own, they then proceeded to win their first local derby against Hertha Berlin 1-0 creating amazing scenes at the Stadion An der Alten Forsterei.

This was no normal derby.  This was the first time the Bundesliga had seen a fixture between East Berlin and West Berlin.  It doesn’t come more dramatic than a 90th minute penalty kick winner and it was those scenes from that one match which added Union Berlin to my German Football Stadiums list.

The attraction has only grown throughout the season.  Many people have been fortunate to visit the Stadion An der Alten Forsterei which in English is translated as Stadium at the old Forester’s House.

The name translates as Stadium at the Old Forester’s House.

The stadium has a smaller capacity than others in our list, just 22,012, however the story of this stadium is worthy of a visit on it’s own.  Built originally in 1920, the stadium was in a poor condition and it was the Union fans, 2300 of them, who volunteered over 140,000 hours of their time to refurbish it as the club could not afford to.

The final draw to this ground is the standing capacity.  More than 18,000 are standing spaces helping create a vibrant and loud atmosphere, rather than just one section of the ground.  I am sure that many ground-hoppers have a visit to this unique stadium high on their list too.

The promotion of Türkgücü München into the third tier of German Football has led to the opening of a new opportunity for many ground-hoppers.

The Munich Olympic Stadium, which will host up to 8 matches for the newly promoted team, hasn’t seen professional football there since Bayern Munich left for the Allianz Arena back in 2005.  The stadium, which has a unique and iconic tent-style roof, holds almost 70,000 fans and will be a completely different experience to your standard football ground.

Having visited the Berlin Olympiastadion earlier in the year, I now want to add this to the list.

The Olympiastadion Munich will host up to 8 matches next season.

So that brings to a conclusion our 5 German Football Stadiums which we intend to visit sooner rather than later.  Please do feel free to share our tweets and blogs as this helps us a lot.

We also have a YouTube Channel which you can subscribe too as we prepare for a new season of football trips for us and of course our customers who want to take themselves off on one of our amazing Mystery Football Trips!