Our Bonn and Dusseldorf weekend came exactly 8 months since our last trip to Germany which was a match between Hertha Berlin and Bayern Munich.  With tickets not available on general sale at the top level, we planned a weekend in Bonn and Dusseldorf which would allow us to take in two matches in the lower leagues.  The lucky locations would be Bonner SC v Wegberg-Beeck and then TuRu Dusseldorf v Teutonia St. Tonis. 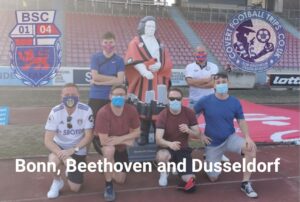 It was an early 4am start on Saturday from Norwich down the A11/M11 to Stansted Airport for an 8am flight, not really knowing whether the lesser number of people travelling during the current situation would make it a quicker airport experience, or whether extra measures would make it more long-winded.  Fortunately it was the former.

Ahead of travelling, Ryanair sent many emails telling me to complete forms otherwise I wouldn’t be able to enter the country.  However when I reached Passport Control the document wasn’t requested or viewed.

On Saturday the match of choice was Bonner SC v Wegberg-Beeck based in Bonn.  With the flight taking just 55 minutes, landing early and my taxi driver already waiting in arrivals, the transfer from plane to hotel was slick. On arrival at the hotel I gave up my room with a balcony to take advantage of a standard room which was already available and I was on the train to Bonn by 11am.

As the train passed through Köln, a group of 5 guys got on and sat adjacent to me, instantly spotting the Covert Football Trips German Football Shirt, available to purchase here, one of them suggested I could be going to Bonn. This was of course their destination too.  After some good conversation we went our separate ways at Bonn, soon to be reunited inside the ground.  Before heading to the stadium I had a brisk walk around a vibrant Bonn City Centre, then I opted for a bus to the stadium which took about 20 minutes.

On arrival at The Sportpark Nord the first view from outside were the spectacularly angled floodlights. 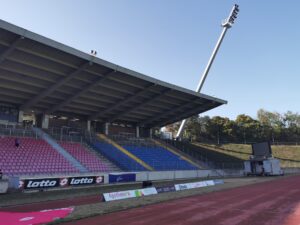 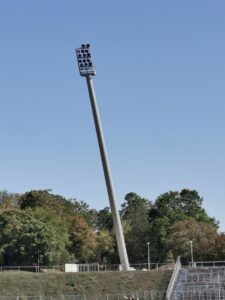 At the gate staff were checking tickets and collecting data with facemasks mandatory whilst not sitting in your dedicated seat.  The stadium sound system pumped music and the club anthem around the venue pre-match.  Enjoy the track 👇

Beer was available on draught in a small bar at the top of the stand with hardly any queuing which meant regular visits were made. The beer cups met our low expectations with a 2/10 generated by our Beer Cup Calculator.  The club also had a small fan-shop in the form of a pop up booth where I obtained a Bonner facemask.  At half-time after a tough 45 minutes in the heat, players were made to take a long walk uphill to the changing rooms.

Every stadium and club has a story, and Bonner SC is no different.  Infront of our seats, on the pitch side was some form of statue which gets wheeled out for each match.  All what was visible was a person in a gown and grey hair.  On asking the steward who the old lady was, I was informed it was actually the composer, Beethoven! Clearly I had done zero research on Bonn and for those who wish to know, this was the birthplace of Ludwig van Beethoven.  You can read more about why the statue is now on the pitch by clicking here.   Not to want to miss out on an opportunity, after most fans had left the arena, we (that’s me and the group mentioned earlier who I met on the train), were able to negotiate our way onto the pitch for a great photo with the clubs new iconic mascot! 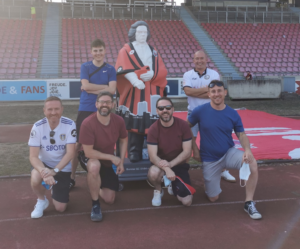 The Beethoven Statue currently stands on the sidelines for every match.

The match itself was a fairly uneventful affair with the away side winning 2-0.

Day Two of our Bonn and Dusseldorf Football Weekend on Sunday gave us an opportunity to visit local club Turu Dusseldorf who play in Oberliga Niederrhein which is the 5th tier of German Football.  The hosts nicknamed “Die Tauben” (The Doves) started the day on zero points from their first two games.

From the City Centre we jumped on the U73 U-Bahn at Heinrich-Heine-Allee for 6 stops getting off at Auf’m Hennekemp.  From here it was a simple 11 minute walk down the main road.  Arriving at 2.20pm I was one of the first to enter, I offered my print at home Ticket and after providing my details for tracking purposes was given an official ticket to go through.

Unlike the previous day at Bonner, there was more freedom.  There were no set seats, instead the Club had created 2 metre seating distances with clear signage. The whole stadium was open so a great choice of the Main Stand which was tiered and in the shade, a terraced area either end of the main stand, the shady grass verge behind the goal, or the steps on the far side which needed a good weeding and reminded me of the lost football pitch at Pripyat, Chernobyl.  We chose the latter which was positioned next to the electronic scoreboard.  In sweltering temperatures both teams put on an excellent display. 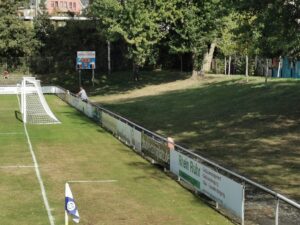 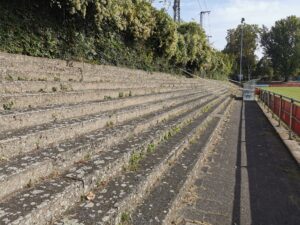 Our position for the 1st Half Action! 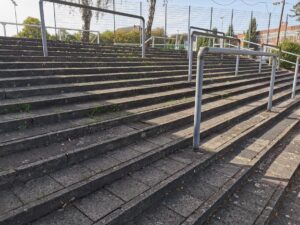 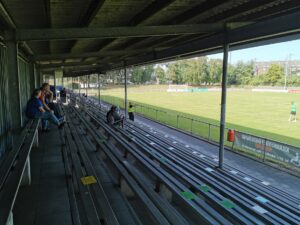 The Seated Stand where we viewed the Second Half. 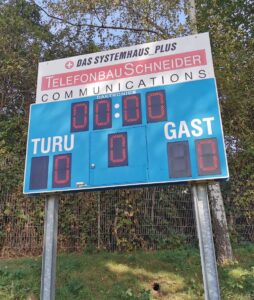 The match was quite end to end with both teams looking like they could score. The closest Turu Dusseldorf came was from this throw-in, and a powerful shot from number 15 which was well saved. The long throw seemed to be a clear method of attack for Turu Dusseldorf.   This time the ball ended up in the net, only to be ruled out for a foul on the first challenge.

For the Second Half we moved into the shade and into the “Bierstand Section”.  Before entering we purchased more beers from the hut.  There was just the one bottled option which had to be poured into a plastic half pint which again scored a 2/10 on our Beer Cup Calculator.

We were welcomed in and enjoyed watching the second half from here. The visitors Teutonia decided to pile on the pressure and the visiting spectators were getting frustrated with the number of chances going begging.   Their Number 14 was guilty of a double miss, firstly striking the post and then when the rebound eventually reached him a wild lash at the ball – you may squirm when you watch this!  👇

Teutonia were looking the most likely to score. The breakthrough would come though after 77 minutes and a goal worthy of winning the match. A delightful dink from 25 yards sailed over the keeper for what could be one of the goals of the weekend!  Please feel free to share, it’s that good!  The celebration wasn’t bad either….

So the second match of our Bonn and Dusseldorf Football Weekend finished TuRu Düsseldorf 0 Teutonia 1.  After the match we met Jannik Schulte who was happy to share his joy for gaining the 3pts. 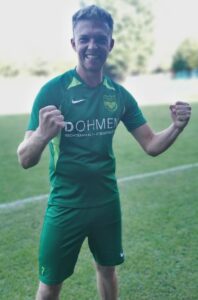 Finally to the guy who may say he was waiting for a train (but let several go by) to watch the game from above saving himself the €9 entry fee.  He’s of course done nothing wrong but was fascinating to see.

Another fantastic football weekend.  We can’t wait to offer our Covert Football Trips again.  If you haven’t already done so, please register your email on our homepage here so we can send you notifications when our trips are live again!

Have you seen our latest product Bundesliga Boxes ??  These are brand new Mystery Boxes containing a brand new German Club Shirt amongst a few other pieces of memorabilia.  Check it out here.

We’ll be back with more match reports soon….