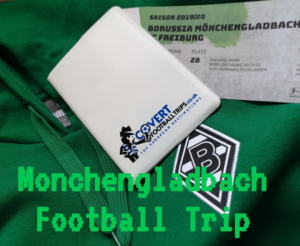 Sitting in a wooden hut decorated for Christmas, hands cupped around a glass of gluhwein, was not planned activity for this Borussia Monchengladbach Football Trip.  Having spent the previous day and evening in Aachen, we had arrived early on the train into Monchenladbach.  As we alighted the station, the intention was to find a nice bar however after ten minutes of wandering through a deserted Sunday Morning High Street we opted for the festive cabin – mainly due to the low temperatures which had probably just risen above zero. 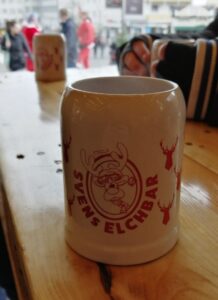 We didn’t stay too long and as we left we noticed the “Weihnachtsdorf” which had just opened allowing customers in for festive treats and funfair rides.  Whilst tempting, our eyes hit the traditional pub building on the left instead. 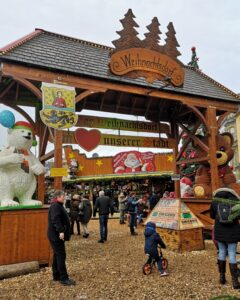 That building was  St Vith which is a classic German Brewery Pub and the oldest in Monchengladbach.  There were a couple of other bars around the corner however we remained in this one for the duration of our time in the City Centre.  As soon as we entered it was obvious that this was a classy and welcoming venue.  We were greeted and asked whether we were eating which we declined.  The venue was full and they opt for seating only, there is no room for standing.  However they were very accommodating locating us 4 seats at the main bar where we perched for a good two hours.  The main beer served was an Altbier brewed by Bolten Brewery but we tried quite a selection including their Ur-Weizen whilst I opted for their unfiltered flavoursome dark “Ur-Alt” beer.

The pub was of course full of Borussia Monchengladbach fans although a few Freiburg fans were able to feel comfortable in their colours too.

Our Borussia Monchengladbach Football Trip is very similar to what we at Covert Football Trips offer our customers – an itinerary which isn’t rushed allowing time to enjoy the city you are visiting as much as the Mystery Football Match! 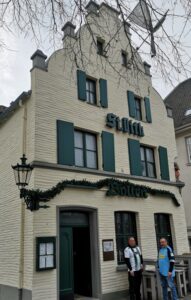 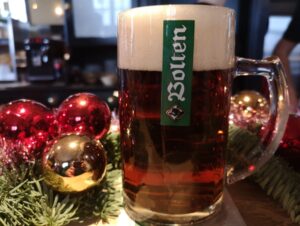 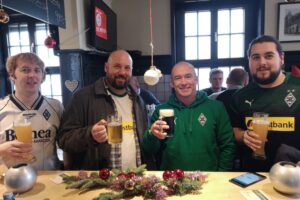 Good selection of beers from Bolten Brewery at St Vith.

The Borussia Monchengladbach Football Trip was planned right back in August 2019 when we identified a weekend to travel.  The aim was to watch Feyenoord play at De Kuip and Borussia Monchengladbach the same weekend.  There was of course a chance that when TV companies got involved that these would clash.  However, with that being a potential problem for many supporters it enabled us to nip in and easily purchase tickets for the Borussia Monchengladbach v Freiburg match.  These cost just 27.50 Euro each direct from the club and arrived in the post several days later.

The obvious happened soon after with the match being moved to the Sunday, therefore clashing with the already scheduled Feyenoord match.  As we had the BM tickets we dropped Feyenoord and created a trilogy of matches including Alemannia Aachen and Fortuna Sittard.  Our trip to Gladbach would be the final match of the weekend. 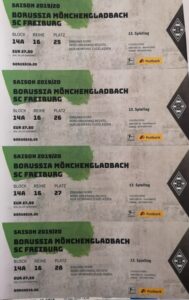 Tickets were purchased in August before the TV Schedule was released.

It was a good walk to the stadium but as we approached the structure was immense.  Outside the stadium there were ample places to purchase merchandise and after taking many photo’s we went inside to see if it was any warmer!

Inside, there was plenty of space to grab refreshments although it was probably busier downstairs than normal simply due to the temperature outside and people waiting until closer to kick-off to take their seat.  The beer cups were of great quality and we scored them a 8.5/10 using our Beer Cup Score Card. 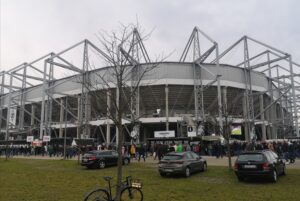 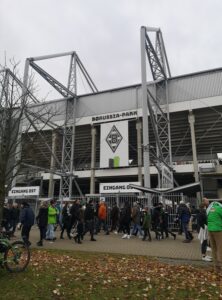 The iconic BM Logo on the Stadium. 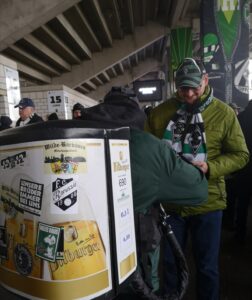 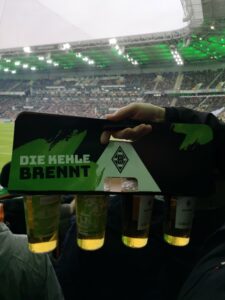 Beer Carrier makes it simple to carry back to your seat.

The Borussia Monchengladbach Football Trip couldn’t have had a better foundation with this match having a huge bearing at the time.  Monchengladbach were the early Bundesliga leaders and going into the weekend were top.  Leipzig had won on Saturday temporarily pushing The Foals back into second.  (Gladbach have been nicknamed The Foals since having a vibrant, attacking team back in the 1960s under Hennes Weisweiler).  Freiburg themselves were in a strong position in 6th place and a victory for them would have seen them join Monchengladbach and Schalke on 25pts.

The classic Die Seele brennt was gloriously song by the entire stadium ahead of kick-off and a real highlight.  The songs kept coming which was welcome to great some movement in the freezing cold stadium.

The crowd got even more animated as you will see in the next video.  Scarves attached to the wrist were held aloft and spun furiously round.  This gloriously merged into “Go West” for a real carnival atmosphere.

There is also the rendition of Die Elf vom Niederrhein which has a chorus translating to:

Yes, we swear stone and leg
To the Elf from the Lower Rhine
Borussia, our dream team,
Because you are our club!

Inside the ground was completely unique.  The Green colours and lighting really take over the place leaving you in no doubt where you are.  As the afternoon developed and the skies darkened, it only made for an even greater spectacle.  This was really magical to see. 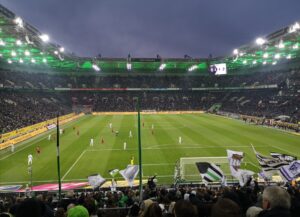 The Green interior of Borussia-Park. 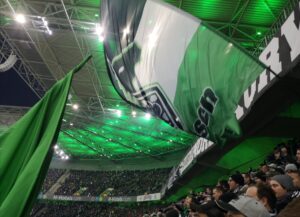 The green lighting in the roof structure 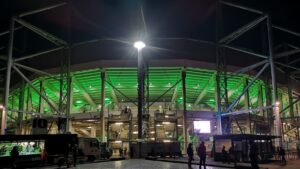 As we left Borussia Park the view was even more spectacular.

The match on our Borussia Monchenglabach football trip didn’t disappoint.  No sooner had the crescendo of noise greeting the players subsided, Gladbach went ahead with a 3rd minute goal from Marcus Thuram.  Thuram, son of Lilian Thuram, was their big money summer signing and has proven to be a quality signing for Borussia Monchengladbach with 10 goals from their attacking formation.

The lead lasted just three minutes as Freiburg unexpectedly equalised with a superb free-kick from Jonathan Schmid.  After that early goal-frenzy the 1st half action finished 1-1.

The second half saw again a glut of goals at the start of the half as Monchengladbach dominated.  Breel Embolo put The Foals ahead on 46 minutes and then Patrick Herrmann seemed to put the game beyond Freiburg’s reach with a 3rd on 51 minutes (Embolo also missed a penalty inbetween these strikes).  However a 58th minute goal by Lucas Holer gave Freiburg a lifeline before Embolo again stepped in for their 4th goal on 71 minutes which competed the scoring.

At the time of this Borussia Monchengladbach Football trip it genuinely felt as though we were witnessing an unlikely change in champions.  In fact the belief only grew when a week later they toppled the giants of German Football, Bayern Munich 2-1 with an injury time winner.  All seemed to be going their way and it was looking more likely to be RB Leipzig as their main contenders.

However, come June 27th 2020 the picture had changed and on the final matchday of the 2019/20 season Monchengladbach had a different battle on their hands as they needed to better Bayern Leverkusen’s score to finish 4th.  They successfully defeated Hertha Berlin 2-1 and qualified for the 2020/2021 Champions League Competition to conclude a successful season.

We hope you’ve enjoyed watching the video’s in this report.  If so we would appreciate you subscribing to our YouTube Channel as this will help us immensely and I hope give you some great content to watch next season.