Much time has passed since UEFA first opened the ticket ballot for Euro 2020.  Back then we had strategically identified the matches we wanted to attend and this included the opening ceremony which would be Turkey v Italy in Rome.

Whilst a ballot it is unknown, we do not know what other “rules” that UEFA may set in the background.  For example is the allocation split so that a percentage of tickets at each stadium will be guaranteed for foreign supporters?  Perhaps even more structured would a certain amount of tickets need to be allocated to each country participating? With UEFA on a mission to “include everyone” this is the view we took.

With England hosting many matches at Wembley we felt the chances were slim to get through the ballot (although I of course put in a cheeky bid for the final at Wembley).   Like most I was disappointed that I didn’t receive those. However I was confident that with most of the UK gunning for Wembley tickets, just perhaps I’d strike gold by planning trips outside of the UK!

Having not been to an international tournament before I wanted to aim high, the opening ceremonies of a competition always amaze me, no more so than that spectacular Diana Ross penalty at USA 94!  We applied for 2 tickets to the opening ceremony in Rome which as a host city I presumed would mean watching Italy, and also a Quarter Final match in Munich, simply because it was in Munich!

When we received notification that we hadn’t been successful for Wembley, we were told simultaneously that we had got through the ballot and could pay for the Rome and Munich tickets –  we did not delay in completing this!

Due to Covid-19 of course things didn’t materialise as they should and credit to UEFA they offered at multiple points to fully reimburse the tickets.  With the Summer of 2021 on the horizon it became clear that capacities would be limited and travel may still be restricted so when the final chance to have a ticket refund came it was made clear that if you were successful in the ballot based on smaller capacities you were expected to be there or lose out. Having spent 18 months waiting to get to Rome we were not going to fall at the final hurdle.   If we were successful and couldn’t travel then the £150 for tickets would be something we would just accept.

Two days before the trip we received a nuisance of an email from UEFA.   Up till this point we had been made aware of the necessary Covid-19 tests we would have to have to enter the country and had booked these for the day before the flight. However the latest email stated we need a negative test 48 hours before kick-off meaning that the one we had to enter the country would be invalid by just a few hours. With a 1.20pm flight from Stansted we managed to book a 9.30am antigen test at Boots in Norwich (another £60) and managed to get to Stansted in time for the flight with the medical certificate arriving on email on the way.  This was an unnecessary issue which UEFA should have clarified far earlier almost putting the trip in jeopardy.

On matchday spectators had a specific 30 minute time-slot to enter the stadium, ours was 6pm to 6.30pm local time for what was a 9pm kick-off.

Stadio Olimpico is located North-West of Rome and we took a Uber most of the way, opting to jump out early so we could experience the walk over the River Tiber.  On the far side of the bridge which is directly outside the stadium, fans were already gathering, we grabbed a beer from one of the shacks situated there and got involved like everyone else purchasing merchandise.  I wouldn’t normally spend money on a green, white and red wig plus a vuvuzela but what the heck, its been 18 months!!!! 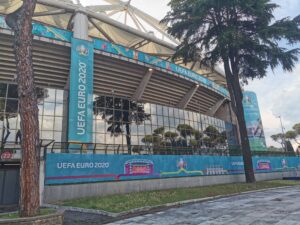 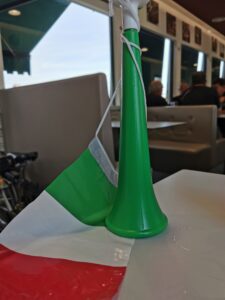 Vuvuzela’s were being purchased by Italian fans

Fans of Turkey were in great voice and as 6pm approached they dominated the area.   A Pyrotechnic flare was set off however rather than being the first of many it was quickly extinguished as stewards tried to keep things in check.

As travellers and supporters we had been constantly informed of what was required of us, in terms of documents we had to have and checklists of what was and wasn’t allowed into the stadium.

When it was our turn at the gate we were asked to show our Covid-19 test result by a lad who I’d be surprised if was 18.   He didn’t really know what he was looking for, I pointed to the word negative and he was happy.   As per the airport experience, which you can read here, this piece of paper really could have stated anything.   I hope that anyone with a ticket who had tested positive didn’t try to blag their way in, as unfortunately they could have succeeded.

Once past this station we hit the bag checkers.  In the build-up to the match UEFA  were urging customers to bring power-banks  so that mobile phones were charged as all tickets were electronic.   So to be pulled aside, as were two others in-front of me, because they were not going to allow power-banks into the stadium was a little irritating.  Spectators had to follow many rules for this experience, it’s a shame simple pieces of information like this hadn’t filtered through.  Fortunately it was a minor delay with a supervisor eventually confirming we were right.  I won’t lie, the relief of getting over all of the hurdles was significant.

Across the host cities there were different capacities agreed.  25% capacity was the minimum UEFA demanded and that is what the capacity was for the Stadio Olimpico in Rome.  The 16,000 spectators were spaced out with seats marked with a green tick to offer social distancing.  Like anywhere in Rome, face-masks were mandatory. 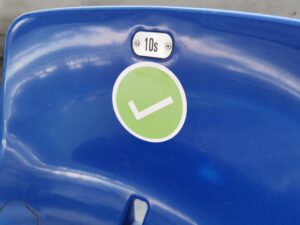 It was announced the evening before the match that Andrea Bocelli would sing Nessun Dorma at the Opening Ceremony to launch the Euro 2020 tournament.  Whilst we looked forward to this, nothing could prepare us for what was a spectacular moment, something which we will remember for a long time.   For me as I listened, looked around the stadium and welled up, it was the moment I felt football was on its way back – this is a massive step forward to fans being back in Stadiums in larger volumes. 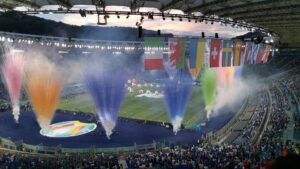 The Opening Ceremony was a spectacular event

The match got under way and the first half saw Italy on top, if not inspiring. The first half ended 0-0 and it was clear that the points were there for the taking.  In the second half Italy really did come to life and when the first goal was turned into his own net by the Juventus defender Merih Demiral the Italian fans where we were positioned were ecstatic.

Italy would score twice more but the celebrations grew weaker with each goal. The second more a relief that they knew they had secured the points. The third goal was like clapping a team who had just scored in a warm up match – perhaps understandable as some fans, myself included, had been in the stadium coming up to 5 hours on a very humid evening.

As mentioned earlier the rapport between both sets of fans was a sight to behold and the behaviour had been impeccable. In the stadium itself, before and after the match, there were countless examples of Italy fans sandwiched between Turkish fans holding 50/50 scarves.

A fantastic start to the tournament – enjoy Euro 2020!