The Road to Wembley

The Road to Wembley

The Road To Wembley!

The Road to Wembley is not normally something we get involved with until the 3rd Round proper, however a lack of any football recently has turned our heads a little.  Having experienced some non-league football last month on the Isle of Wight, the opportunity to repeat it locally was too good to turn down.  Add to that the match between Wroxham and Arlesey Town was an FA Cup Extra Preliminary Round we just had to turn up. 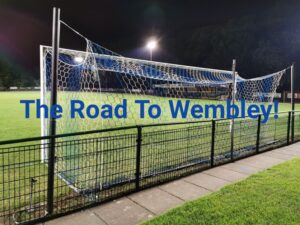 We decided to get the train to Wroxham and therefore before going to the match we decided to meet at The Compleat Angler pub in Norwich, opposite the station.  After supping a couple of pints of Beavertown Neck Oil we boarded the train which took just 13 minutes from Norwich to Wroxham. 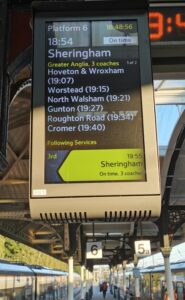 The train from Norwich to Wroxham takes just 13 minutes.

Last week we created a blog asking football fans to do what we are doing, supporting non-league clubs who may have suffered a loss of income due to Covid-19.  When Wroxham FC advertised their tickets for sale on their website at £7 we instantly snapped two up, starting the road to Wembley!

In the build up we were asked to download in advance an app called “evePass” to help gain quicker access to the ground for track and trace purposes.  We did so, however many people obviously didn’t and those deciding to do so at the gate caused delays getting in.  It wasn’t the clubs fault, the instructions had been very clear with reminders sent by text message too.

Whilst waiting to get into the ground we used the time to look into the line up which the club had posted on their twitter feed.  Some interesting names appeared….

First of all we had Ollie Sutton in goal.  Ollie is the son of ex-Norwich and Celtic centre forward Chris Sutton.

Next the name Tom Huckerby wearing number 5.  You don’t need to be a Norwich fan to know the name Huckerby and yes this was Darren Huckerby’s son.  Darren played 190 times for Norwich City scoring 41 goals and was instrumental in the club winning the Division One Title in 2003/04.  Darren was on the sidelines supporting.

The names kept coming.  At number 6 was the evergreen Grant Holt.  Yes THE Grant Holt who banged in 68 goals for Norwich City in 154 matches.  These days Grant is playing a much deeper role at the back.

With such talent surely there could be only none winner on the road to Wembley? 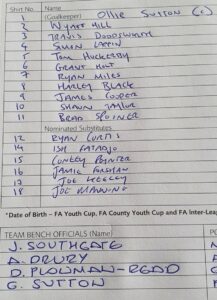 The line up which Wroxham fielded. 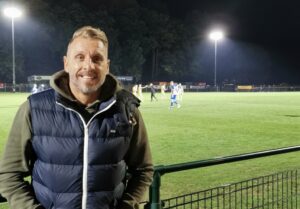 Due to the slight delay getting into the ground we missed the kick-off and once inside we started walking the perimeter of the ground.  We had just wandered past the opposition goalmouth when Wroxham took the lead from their first attack.  Through the excellent tweeting by the club we learned that the goal was scored by James Cooper making it Wroxham 1 Arlesey Town 0.

Within minutes and still before we had settled, Wroxham doubled their lead as Brad Spooner notched after just 4 minutes.  An incredible start for the home side and it wasn’t going to slow down.

By half-time the Yachtsmen had scored three more goals.  One for Tom Huckerby which a certain spectator would have enjoyed, the 4th goal was scored by Shaun Taylor and number 5 was a superb dink from Ryan Miles.  The football had been that good to watch that Darren Huckerby tweeted “playing like 2008 Barcelona”.

Half Time 5-0 so we headed to the clubhouse and had a pint to review the first half. 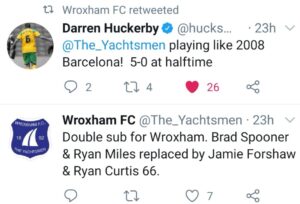 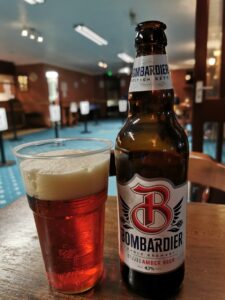 The club offer a good selection of beers.

In the second half there were no more goals, Wroxham could and should have extended their lead.  No-one was moaning though, a really great evening of football.

During the match, the crew behind the home goal constantly cheered their team on.  One little song which made us chuckle was “5-0 down with a fancy board” as the visitors made a substitution using their electronic scoreboard.

Here are a few highlights from the second half…..

The match finished 5-0 to Wroxham who sail through to the next round.  The Road to Wembley is a long one and they are in the hat for the next step!

If you are interested in our Covert Football Weekends where we send you to a Mystery European City and match, please register your interest on our website here so you will receive details when they are available again.