This month we chalked off another country which we have been keen to include for future Covert Football Trips.  Tallinn is the Capital City of Estonia and we would see what the city has to offer as well as take in a JK Tallinna Kalev match.

The Tallinn football experience may surprise you, in that the football season in Estonia runs between March and November due to the colder winters.  Therefore the season would be half way through, as opposed to many other European leagues which are reaching their conclusion.

Like all of our weekends, we want to experience what the City has to offer.  There was no rushing around, just a great football and city experience.

Travel to Estonia is quite easy with direct flights from Liverpool, London and Edinburgh.  We took an early Wednesday morning flight from London Stanstead departing at 6.05am and arriving just before lunch.  Conveniently there would be a match late afternoon.

Who are JK Tallinna Kalev?

JK Tallinna Kalev participate in The Meistriliiga which is the top Estonian Football League which was created in 1992.  The hosts play their matches at the Kadrioru Stadium.

The stadium was impressive although average attendances for home matches are nowadays around 200. 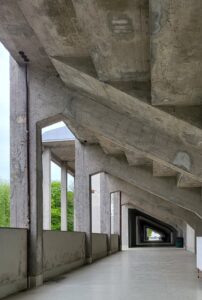 JK Tallinna Kalev is the oldest football club in Estonia however found themselves in a perilous position at the foot of the table with 7pts from their opening twelve matches and a large negative Goal Difference.

The match against equally lowly Vaprus is named the Coolbet Derby due to both clubs having them as their shirt sponsor. 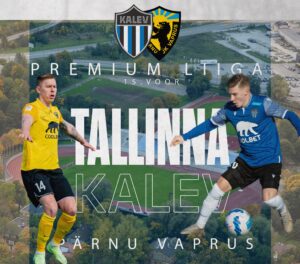 Our Tallinn football experience saw the match finish 1-0 to Tallinna Kalev and we captured the only goal of the game below.  The goal was scored by Foday Trawally with a great strike from outside the box.

The small crowd, including ourselves, made great noise celebrating the victory which would see the club climb to third from bottom in the table.

After the match we were able to meet and celebrate the victory with goalscorer Foday Trawally. 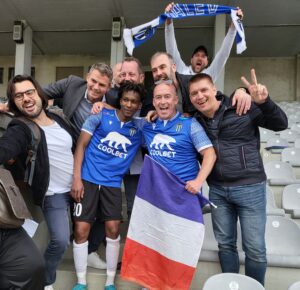 Celebrating the victory with Foday Trawally

Each team in the league plays each other club 4 times during the season with the bottom team relegated and the team finishing 9th facing a play-off.

Following this victory, Kalev managed a 2-2 draw on Saturday 28th May against Legion – a club they have leapfrogged into 8th place.

Our Tallinn football experience was very much in line with our expectations and Tallinna Kalev is certainly a club we would recommend you going to see.

As we mentioned at the start, Covert Football Trips wants customers to have a great football experience whilst enjoying the city you are visiting – this can be achieved no more so than in Tallinn.  It is a beautiful city to walk round with so many cobbled streets. 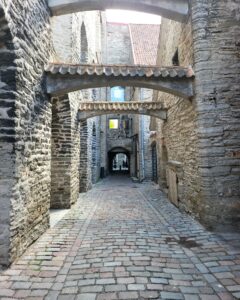 We spent a lot of time in Town Hall Square, the heart of the city, sitting in outside cafe’s and bars enjoying the atmosphere of the eight century old area. 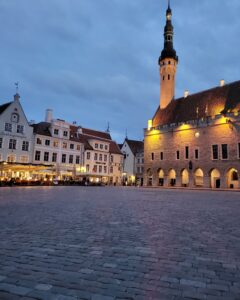 One other place we recommend when visiting Tallinn is the KGB Museum, located in Hotel Viru.  The tour is based on the 23rd floor of the hotel – although the lift only takes you to floor 22 and there begins the mystery.

The tour guide is a great character and makes the hour long experience very enjoyable.  There are great views across Tallinn from the balconies which they open up to use for photographs.

The stories revolve around how Soviet surveillance technology was used against foreign guests staying in the hotel.  We would recommend booking in advance as we chose to book the day before and managed to grab the final 5 spaces.  It costs approximately 10 Euros. 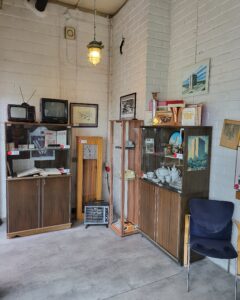 Covert Football Trips offers Mystery Football Trips around Europe.  Currently Estonia is not on the shortlist however we are happy to look into bespoke trips to Tallinn for football and culture.