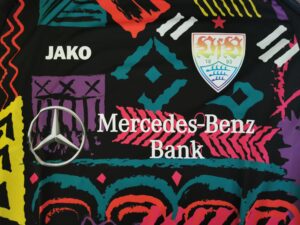 Sometimes a Shirt is announced which just seems crazy.  That was exactly the thought when Gregol Kobel appeared in this diversity shirt during a match versus Mainz in January.  The Stuttgart Tropicana Goalkeeper Shirt immediately set tongues wagging when it was unveiled alongside another limited edition shirt back in January. 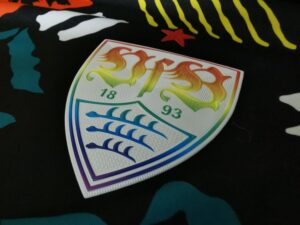 Initially it seemed that this shirt would not be available.  The Home White Diversity Shirt was taking most of the headlines and it is unknown whether this crazy Goalkeeper shirt becoming available just days later was fan demand or always part of the plan.  It sold out quickly with deliveries promised for May 2021 – that’s some pre-order wait, however it finally arrived last week.

Under the title “Colourful and Wild” the shirt created by Jako hosts a rainbow themed Stuttgart badge to compliment the already bold and colourful jersey.   When you look at the patterns it’s like a classroom has been given a blank, black canvas with each child allocated a segment to go wild.  Artistic, imaginative children.  Yellow, Orange, Pink and Blue stare back at you, then there are the lines and the patterns – there is so much to look at. 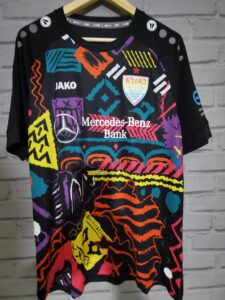 The only disappointment of the Stuttgart Tropicana Goalkeeper Shirt is that the crazy doodles are not carried through to the back of the shirt, the reverse is a blank, black and unimaginative – even the VfB logo on the neck is just white.  This is in contrast to the outfield creation where the colours flow through to the back.  Is there a reason for not doing the same? 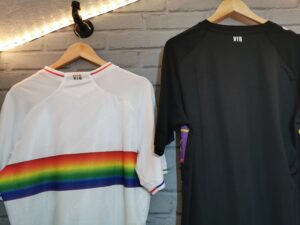 The uninspiring reverse of the Goalkeeper Shirt

Remember Rene Higuita, the mad Colombian goalkeeper who wore some outrageous shirts in the 1990s?  I am sure that he would be comfortable wearing, if not adoring of this shirt.  Therefore it’s a real shame that we won’t see it appearing on a regular basis.  Sometimes the rarity and beauty of a special shirt is unnecessarily diluted by becoming a shirt worn, just once, in a rather unimportant Bundesliga match on a Friday night against a team who at the time seemed destined for relegation.

Together, the shirts look beautiful.  Just remember if you are wearing the Stuttgart Tropicana Goalkeeper Shirt, don’t turn around. 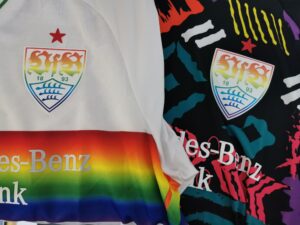