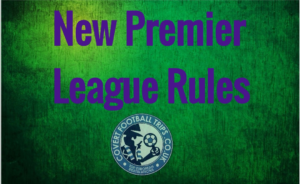 New Premier League Rules will soon be issued as the 2020/2021 season approaches.  The upcoming season always brings fresh legislations which often mean a chaotic start as players and officials get to grasps with the new guidelines.  The stand-out changes in policy normally affect parts of the game which can have a huge influence on the result.  The amendments are often taking our sport in a new direction, sometimes catching up with how the game is played.

It was 1992 when the Back-Pass Rule came in.  It is mad looking back that a player could intentionally pass the ball back to the Goalkeeper who was allowed to pick it up.  This caused significant slow-downs in play removing the tempo out of the game and time-wasting was a massively tactical part of seeing a match out.  This was a great rule change which at the time was questioned as to whether it would help the game or not.

Recently we have suffered the introduction of  VAR which even after one full season is causing more issues than it is solving.  Perhaps other rule changes can help remove VAR from the game, read on for how I see that happening.

There are already rumoured law changes such as encroachment on penalties being taken, the gap to determine if a player is off-side and how VAR will be used differently.  So below are Five New Premier League Rules we think could be considered, some affecting the game and some benefitting the fans.

Because we watch a lot of football in other countries, it makes not being allowed to drink a beer in the stands in the UK feel even more outrageous.  Not allowing an adult to purchase a beer and take it to the seat is over the top control.  Anyone who has travelled abroad knows that you can do exactly this enjoying the refreshments at leisure which YOU have paid for.  In the UK you have to buy a beer and then normally after the time taken to queue, need to down a pint in under 10 minutes.  It’s either that or miss some of the second half.  Is that really in line with the “Drink Responsibly” campaign?

It got worse several years ago when suddenly you couldn’t even take a bottle of soft drink into a ground due to it possibly being used as a missile.  Really?  I take a large and heavy power-bank for my mobile phone in with no problem which could be deemed far more dangerous.  I, like many others, have myself been hit by a coin at a match yet money is still allowed in.  Of course it is.

New Premier League Rules should allow paying fans to drink at their leisure in the stands. 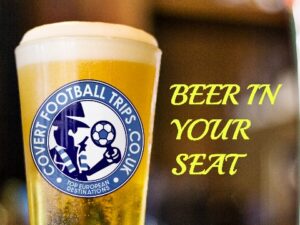 Drinking at your seat should be acceptable at UK grounds.

I recently watched the Spurs v Everton match.  It was obvious that the Tottenham Players had a clear directive – take turns to foul Richarlison.  First Ben Davies had a nibble, then it was Harry Winks and then Celso.  Time after time players took their turn with snide tackles which could cause ankle and ligament damage.  Eventually Ben Davies received a yellow card for his second go at the same player however still the fouls came.  He was clearly a target in order to help weaken their opposition.

Tackles like this have always been part of the game, however in the current climate and rules, many are yellow card offences, yet not upheld.  There is of course a pressure on a referee to let a game flow and not send players off.

If a player is allowed “A free go” at fouling a player then clearly the target is not protected at all.

Amongst our suggested New Premier League Rules is this.  Following such a foul (I’m not talking about obstruction, I mean foul with an intent to hurt another player) then once one warning has been issued a yellow card should follow for all offences against that player – even if it is the players first offence.  Surely the rule is to protect the player, not defend those committing the fouls.  Teams could not afford such a totting up and would prevent Managers, and players, using these tactics. 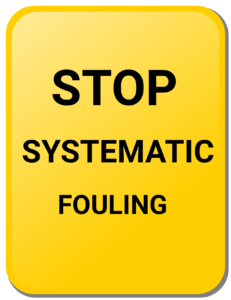 Yellow Cards could be given to all players systematically fouling the same player.

3.  TV FIXTURES SHOULD BE SET FURTHER IN ADVANCE

New Premier League Rules should include TV Companies scheduling more matches further in advance.  The current method of revealing TV fixtures is as archaic as a 1980s television set.  The fixture computer has been doing the same job for years, setting fixtures alongside police advice.  By the end of May each year (except during a Pandemic) the authorities know which teams are playing in the league.  We all know when Christmas is and we all know when the International Fixtures are placed.  Therefore the only people preventing fixtures being set in advance are those running the television companies. 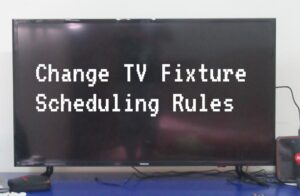 Why does this need to change?  For us, the fans.  There is no reason why the TV companies cannot be asked in June to agree the fixtures they would like to schedule, on which dates and at what time.  I would personally like to see that for the entire season however that is not completely necessary.  As a fan 4 months notice would allow you to benefit from cheaper public transport, better hotel options and better planning around family and work.

The argument against this of course is always the cup competitions, and in particular how European Competitions can affect the domestic league.  However, again we all know which clubs are involved so Sunday matches can be scheduled for those in the Europa League which TV companies wish to televise.

If a club has to play a couple of games with only a 2-3 day break and have an unfair disadvantage occasionally then so be it.  If the football authorities wanted desperately to play out the remainder of the 2019/20 season with games coming thick and fast, rather than declare it null and void due to money, then they have proven that the above doesn’t really matter.

It’s time to help the fans out.  This means the Premier League and Television Companies planning better, like normal business have to do.  There’s a bit more risk for them but I believe that’s something they have to swallow – for the fans!

2.   SHEPHERDING THE BALL OUT

I absolutely detest a clumsy, bulky 6ft tall defender being allowed to shepherd the ball out of play when he has had 10 yards of space to turn with the ball and play.

“….If the opponent is not held off with the arms or body!”

This rule is a farce, in every example you watch, attacking players are held off by a defenders body, often with flailing arms, and the defender is given the benefit.  If a defender falls over with the gentlest of touches then the attacker is deemed to have fouled.  The above rule would suggest that referee’s do not follow this law of the game at all.

If as a player you can’t manage to control, turn and pass a ball with an opposing player in pursuit then either improve your game or hit row Z and concede possession.  Shepherding is not a skill and as part of the New Premier League Rules should be removed from the game, forcing a player to play the ball, or else give a foul for obstruction.  There is no need to have shielding.

So, this is the big one which I think could help the game massively. I am not talking about Penalty Shoot-Outs, I am saying ANY Penalty Kick which would normally be awarded within the 90 minutes.

We recently ran a poll on our Twitter asking people how many penalties which are awarded or denied, even with VAR involved, do you think reach an in-correct decision.  The answer was a staggering 40% believed that over half the penalties given or denied were WRONG!   We know that almost every match is scarred by a referee decision and much of the time those sitting at Stockley Park are influencing it.

Now, here’s the interesting part.  With VAR seemingly there in the main to award or deny penalties, then by scrapping Penalty Kicks altogether then surely we can wave goodbye to VAR too?  I am sure the issuing of yellow/red cards can return to the old rules of giving the referee the responsibility!

Abolish Penalty Kicks??  YES!  If we cannot get decisions correct even with multiple replays and we cannot improve player integrity when lightly touched in the box (or not touched at all) then perhaps removing the penalty spot is the best thing to do.  Time after time I watch my team denied penalties which affects a result.  Sometimes a soft penalty given for an innocuous challenge with a ball running out of play and in a non goal-scoring position seems a disproportionate advantage. 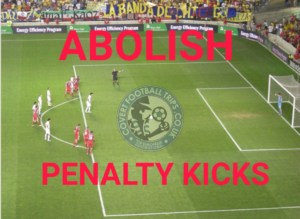 Abolishing Penalty Kicks during 90 minutes may be a step towards removing VAR.

It’s time to change the law.  New Premier League Rules should include that a foul in the 18 Yard Box (or handball) should result in an indirect free-kick.  It makes the penalty (pardon the pun) for the crime far less of a black and white end result.  The attacking team still have a huge advantage but it’s not a guaranteed goal, which is virtually is when a penalty kick is awarded.  Imagine the additional drama of these free-kicks taking place with defensive walls across the goalmouth!

If a player handles the ball on the line preventing a goal, or if a player fouls to deny a goal-scoring opportunity, the player receives a red card so the team is still penalised heavily (albeit in the 89th minute far less so).  It has often been suggested that a deliberate handball is penalised twice with a red card and penalty and this solves that problem too.

Abolish Penalty Kicks.  Why Not!  It will also mean VAR is not required for potential match-winning decisions.

That concludes our suggested new rules for the 2020/2021 season.  What new rules do you think the Premier League will bring in for the new season?  Please let us know on our Twitter Page @CovertFootyTrip