A Milan Football Weekend is on every football supporters bucket list.  The San Siro, officially known as Stadio Giuseppe Meazza, is an iconic stadium in World Football which attracts the visitors just as much as the football clubs who occupy it.  It was one of the stadiums I remember watching on TV as Italia 90 came to life with that amazing opening match which saw Cameroon beat eventual runners-up Argentina 1-0.

Our route to Milan was via Turin with direct return flights from Stanstead costing £98 per person, including posh seats on row 2 and checked in bags too.  Some people snigger at those paying extra for these seats however personally I like the freedom of getting off the plane first and wasting less time getting to our next destination.

The trip became a double header – we would first start by getting a train to Milan and then back to Turin the next day for Torino v AC Milan which we will cover next week.  The flight arrived in Turin at 09.40am giving us ample time to get to Milan and enjoy the City ahead of the match in the evening.  The train from Turin to Milan took approximately 2 hours. 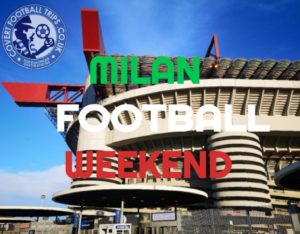 As with all of our football trips, our Milan Football Weekend was created in order to give us time to explore parts of the City.  When booking a Mystery Football Trip with us, this is one thing we ensure for the best possible experience.  The obvious destination is of course the Milan Cathedral (Duomo di Milano) which we made our first port of call and from there we used Google Maps to locate a couple of bars.  One such bar was The English Football Pub which was full of English fans like us on a groundhopping weekend.  The walls were covered in football memorabilia, lots of English club photo’s as well as local heroes of both Milan clubs.

One area to head to if the weather is nice is Navigli, a very trendy area of bars, cafe’s and restaurants lining each side of the canals.  We had plenty of time in the afternoon before the match so spent a few hours here soaking up the sun and drinking amongst the locals.  We returned later that night too and it really offers that traditional Milanese vibe.  There are more restaurants than bars and we found that during the day these venues didn’t like offering their best seating in the sunshine to those who just wanted a drink so worth planning on eating there, rather than on route. 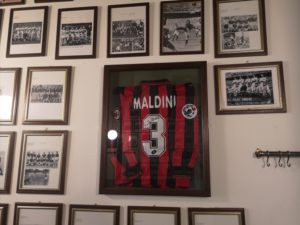 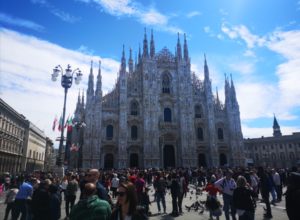 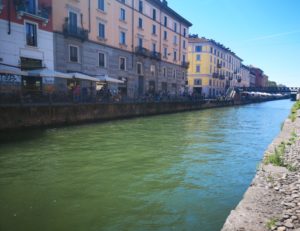 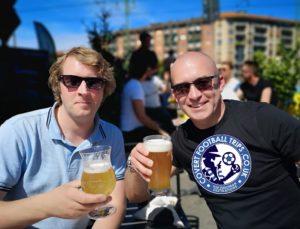 Have refreshments in The Navigli area of Milan.

Outside the San Siro

Even though I had  a few weeks building up to this trip, I was still overawed by the concrete construction which loomed in-front of us.

I was pleased that we had sourced tickets in the gods, more so that I had the excuse to climb one of the iconic towers which sit in each corner of the stadium.  It is only on the ascent when you realise how spectacular these towers are.  Round and round you go as other spectators are found taking a breather half way up whilst others race past you.  There is netting covering the tower which I most likely so objects cannot be easily thrown from up high on the crowds below.

It’s worth noting that in Italy your name appears on the match ticket and you are often asked for identification to match the name upon entering the perimeter of the ground.  This was the case on our trip so we advise you consider a zipped pocket to contain your passport on any visit.  The tickets are obtained directrly from the stadium and delivered electronically as a PDF. 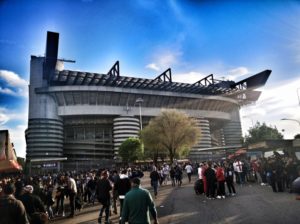 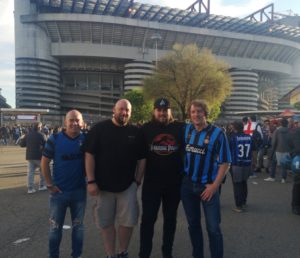 Outside the San Siro Stadium 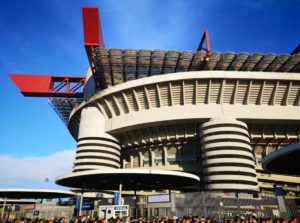 The famous towers of The San Siro. 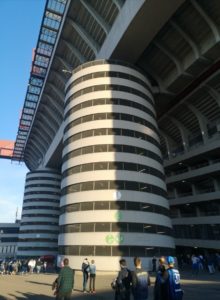 Spectators climb a spiralled walk-way to reach their seats. 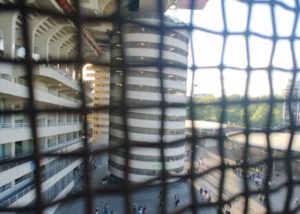 Netting surrounds the inside of the towers 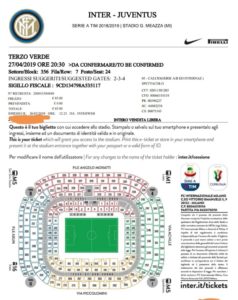 Before the match the atmosphere was electric.  The partially enclosed roof helps to retain the noise which reverberated around.

The San Siro is absolutely massive which is evident in the photograph below.  The San Siro was refurbished before the 1990 World Cup creating the 11 cylindrical towers, the third tier which would temporarily increase the capacity to 86,000, and the amazing roof structure.  We sat extremely high up in Block 356.  The advantages were the stunning views of the whole stadium and the view out to the city.  One thing you notice when climbing to your seat is the steep gradient of the structure.  This area was full of tourists and not the best atmosphere in terms of joining in with the songs.

The facilities inside the San Siro were extremely basic.  The toilets were poor, whilst extremely accessible, it was really only a step up from two planks of wood and a hole I have used on Kilimanjaro.  The bar area was easy to get to however it took an eternity to get served as the beer was so gassy it took too long for them to get through customers.  Along the back of the stand was a gang-way which was where we spent most of our time watching the match as its was quite spacious. 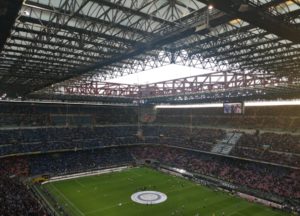 Amazing roof structure held up by the cylindrical towers. 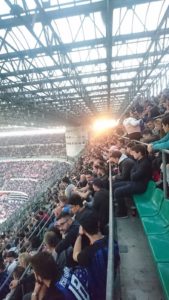 The San Siro has a steep gradient in the upper tier. 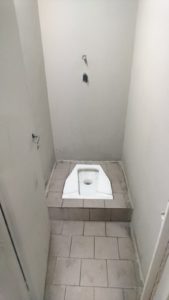 The facilities at The San Siro were basic. 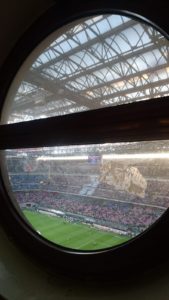 A few small porthole windows allow you to see the pitch when at the bar.

The match we were viewing was Inter Milan v Juventus.  The match took place on Saturday 27th April with Juventus having already sewn up the Serie A title seven days earlier.  Therefore there was some doubt as to what type of performance we may witness.  We shouldn’t have been concerned as these two rivals put on a great spectacle.

Nianggolan put the home side ahead after 7 minutes which was absolute belter.  The ball was floated in from a corner, headed out as far as Politano who beautifully picked out Nianggolan on the volley who hit it first time from 25 yards.  The ball hadn’t touched the ground during the move making it even more wonderful and is a goal to watch over and over.

In the second half we were able to witness one of those special moments as Ronaldo equalised with a 62nd minute strike.  CR7 struck a fierce drive with his dangerous left boot as he latched on to a clever Pjanic back-heel.   The clinical effort from the edge of the area, slotted perfectly inside the post leaving the keeper frozen to the spot.  That strike was Ronaldo’s 600th club goal.

After the match the sheer volume of people who had been inside the stadium was much more evident as swarms of people left at the same time.  Disappointingly the towers which we had used for our ascent to our seats were now not deemed safe for a descent so down many steps we went. Following that exertion, we therefore felt fortunate to jump onto a tram immediately and back towards our hotel where we would return to before heading back to the superb Navigli area which had a completely different vibe about it in the late evening.

Our Milan Football Weekend was to be part of a double-header, with the second part taking us on to Turin.  Please check back next week as we go through our trip to Torino.