Having spent the previous evening in Homburg, Saturday would take us to Kaiserslautern and specifically the Fritz Walter Stadion.  If you want to know about a Kaiserslautern football weekend we hope to cover lots here.

On arrival into the main station, we had no plans so the crowd of fans drinking in the square immediately outside seemed an appropriate place to start.  The reason for the gathering was the Fan Bar located here and inside the walls were awash with classic shirts, scarves and other memorabilia. 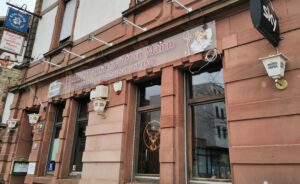 Fan Bar outside the main station

The stadium is close to the town so no planning was required.  We decided to leave the square around one hour before kick-off.  From the train station there seems one way to the stadium, its just a 15 minute stroll and with everyone taking the same route the snaking trail of fans is a sight to behold.  We pass a bar on the first corner and an 1860 Munich shirt is showcased in the window, a sign of their detest for Bayern.

At the next roundabout we stop and admire the construction of Kaiserslautern players – just one of many examples of the cities passion for football.  FCK is graffitied on every wall and post on the way to the stadium – this is very much a one club city.

From this point the walk takes an unexpected turn.  Little did we realise that the Fritz Walter Stadium, named after their famous player, has the highest altitude of all German stadia.  The leisurely stroll became a hike as the gradient became steeper.  The Fritz Walter Stadion appears in our vision looming over us, a stadium which has been on the bucket list for many years was suddenly in touching distance and the view certainly made the climb easier.  Not since climbing one of the turret’s at the San Siro has a walk at a stadium been so demanding. 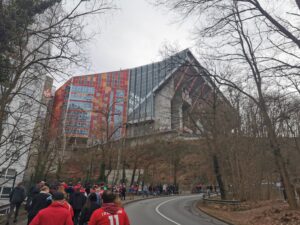 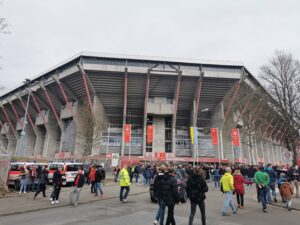 On arrival 40 minutes before kick-off, the crowds were large.  The queue to enter the stadium was significant as officials checked match tickets and Covid certificates in addition to security checks.  It took 15 minutes to get through the gate.  This was possibly one of the largest capacities since restrictions were eased and I am sure this will be more efficient as the club gets used to it.

Inside the stadium we eventually found our block 5.2, the entry point hidden away.  At the bar I ordered one beer and one water, the cost just over 11 Euro was excessive.  On presenting my debit card we were told that it could not be used and as per many other stadiums we needed a special card which needed to be purchased and topped up elsewhere.  The fact that this would be the only purchase made such efforts pointless, so I turned to a Kaiserslautern fan in the queue who had a card and offered him cash if he purchased for me – whilst he hesitantly accepted, I then realised I only had a 20 Euro note and he had no change.  We completed the transaction and 20 Euro’s is possibly the most expensive beer and water combination I have ever experienced.

The match was against Havelse, newly promoted to 3Liga and who occupy 19th place in the table whilst in comparison Kaiserslautern are seeking promotion.  This game surely was a banker for the hosts and one eye of the home fans would be on the match between Braunschweig and Saarbrucken where their promotion chasing rivals were facing off.

The game went as expected, Kaiserslautern dominating and they were infront as early as the 11th minute when Boyd scored.  It was a surprise that the hosts took as long as the 53rd minute to find their second goal, it was a relief that the points were secured and people around me switched to using their Kicker app to track the score elsewhere.

Ritter scored a third goal in the 73rd minute to raise the tempo inside the stadium again and when Kaiserslautern score, my word do they celebrate.  The second the ball hits the net the beer rains down from the top of the stand.

A late 89th minute strike for Saarbrucken confirmed a 2-0 victory for them, aiding Kaiserslautern’s hopes of promotion and the fans were in buoyant mood.  Whilst Magdeburg will take the title, the race is on for the second automatic promotion spot, the defeat for Braunschweig puts Kaiserslautern into pole position with a five point lead having played one match more.  This felt like an end of season climax, however there are still eight matches to play. This result coupled with the defeat for Braunschweig could be significant. 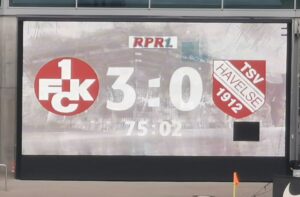 As the match came to a close, the Kaiserslautern fans in unison waved white flags towards their opponents signalling their defeat.

Exiting the Fritz Walter Stadion, we followed the same route back into the town, this time stopping at the bar we had passed earlier housing the 1860 Munich shirt.  Here we spoke to some fans regarding the history of the club including Erica pictured below who first bought a season ticket when the club had financial woes and has continued to do so until now. 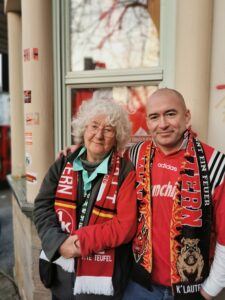 In the evening we chose to stay at The Alcatraz Hotel, a former German prison.  The rooms are actual cells, complete with a toilet in the room! 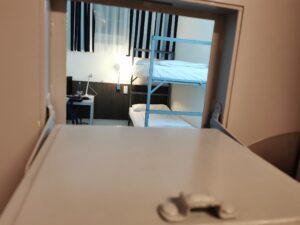 The cell we stayed in at The Alcatraz Hotel 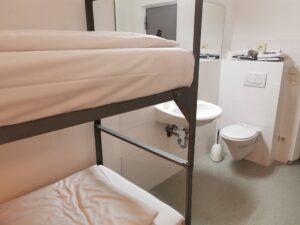 Kaiserslautern surprised us, in terms of how passionate these fans are.  It was fantastic talking to so many people and hearing about their experiences.  As above you can always mix things up a little and the quirky hotel was a great addition to the trip.  We have been invited back should there be a promotion party at the end of the season – we may well return!

Why not let us organise you one of our German Mystery Football weekends, click here to view the package.