This weekend we travelled back to Germany for a Homburg  Football Match.  FC 08 Homburg participate in the Regionalliga Sudwest and for those of you who have experienced Bundesliga Boxes will know their club shirts have featured on a couple of occasions!  This is primarily one of the reasons we wanted to visit the club

Homburg is a town situated in Saarland which is 36km from Saarbrucken.  To get to Homburg we took a flight from London Stansted to Frankfurt International Airport.  The journey by train from the airport to Homburg was just under two hours costing approximately 30 euro.  This was an ICE train from Frankfurt to Mannheim and then a regional train to Homburg.

Ahead of this Homburg Football Match, we were invited to meet club representatives of FC08 Homburg so we headed to the main office in the town.  Here we met Johanna who was delighted to show us the club and we were overwhelmed with the offer of a complimentary match ticket.  In return we passed them one of our Bundesliga Boxes!

The HQ in town incorporates a shop and small museum which is worth visiting.  The club proudly has a timeline of main events photographed on the wall and includes German star Miroslav Klose who started his career at Homburg.  In addition the trophies are on display here including the Regional Cup which allows clubs to participate in the Pokal when won. 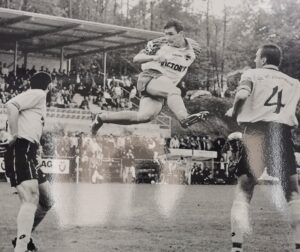 Miroslav Klose in action for Homburg 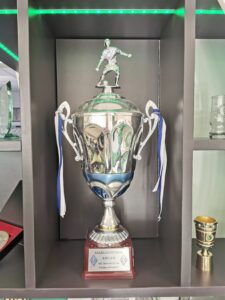 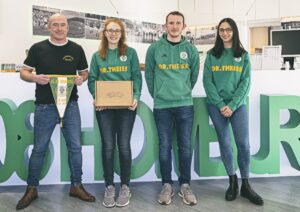 Meeting with Homburg at Club HQ

Homburg went into this match in fantastic form having recently beaten league leaders Mainz II 3-2, which was followed up last week with a 3-0 victory at Schott.

At the start of the day Homburg sat in sixth place, six points behind Offenbach who occupy fifth and also six points above Bahlingen below them – therefore regardless of this result the league position would not alter.  The reverse fixture between the two teams had seen Homburg win 1-0 away back in September and Pirmasens find themselves in 18th position and are deep in a relegation battle following four straight defeats

The Waldstadion opened in 1937 and has received several renovations over the years.  Today it has a capacity of just over 16,000 of which 1723 are seated.  It is a fantastic venue to walk around with terracing around three sides of the ground. 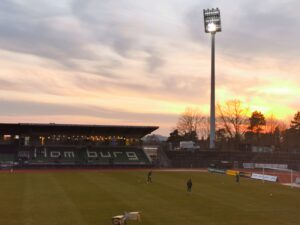 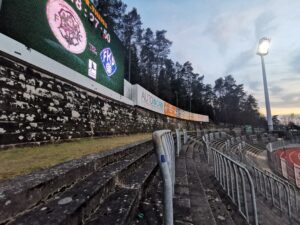 The match kicked off at 7pm local time and Homburg were easy on the eye playing good football.  The local opposition were hungry and biting hard however whilst Pirmasens were the most aggressive it was Homburg who found themselves reduced to 10 men when Seonghoon Cheon was alleged to have fouled the goalkeeper and a red card seemed excessive.  The home crowd rightly were annoyed as the goalkeeper was quick to recover and the booing was consistent throughout the 90 minutes everytime he was in possession.

Homburg has taken the lead when Patrick Dulleck unleashed a powerful strike from the edge of the penalty area just before half-time and almost immediately after the break Pirmasens were level with a goal from Yannick Griess.

Despite the close scoreline, Homburg were dominant and in control of the match, they could have had a large lead but for some poor finishes.  It was left to Philip Schuck to score the winning goal in the 67th minute.  The action can be viewed here 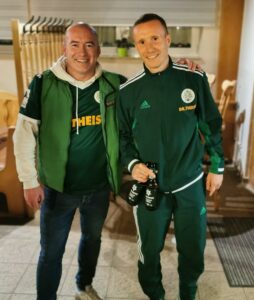 We met star player Markus Mendler after the match

Homburg was a very welcoming club, we met some fantastic fans during the game and afterwards we carried on drinking together in the bar underneath the ground and then into the city.  The dream for these fans is to again reach a higher division and whilst this won’t happen this year, they are right to believe it can happen.  A truly great football experience.

If you haven’t yet experienced a Covert Football Trip then the good news is that they are back on sale!  Our TOR! Mystery Football weekend includes two mystery matches, two nights accommodation and the flights are included too!