There has been one massive omission from our own football travels to Germany and that has been witnessing a dramatic cup match – a game where the result would dictate the progression of one of the teams we were watching.  This is why we looked at an early weekend of the new season, specifically the opening round of the DFB Pokal.

The DFB Pokal is the German Football Cup, equivalent to the FA Cup in England.  It features all clubs from The Bundesliga and Bundesliga 2, the top four teams from 3Liga with most of the other places made up of the regional cup winners  from the previous season.

When the draw was made there is guaranteed to be some David v Goliath fixtures.  We were not disappointed in the options which were created…

Newly promoted to 3Liga, SPVGG Bayreuth were to face Hamburg, Carl Zeiss Jena would get a stab at knocking out Bundesliga side Wolfsburg whilst VfB Lubeck would host Hansa Rostock a club which would no doubt take large numbers of fans.

We opted for the Baltic Sea Dual, as named by VfB Lubeck, which would be their first appearance in the first round since the 2019/20 season.  The match would be Lubeck’s first match of the season, whilst in contrast Hansa Rostock would approach the match full of confidence having beaten Hamburg 1-0 in Bundesliga 2 the previous weekend.

Lubeck qualified for the DFB Cup having beaten TSB Flensburg on penalties in the Schieswig-Holstein Regional Cup back in May.

Journey to the Lohmühle Stadium

Lubeck play at The Lohmühle Stadion and this match would see the largest capacity since Covid, in-fact in the days leading up to the game the club stated that just a handful of standing tickets for home fans remained available which could be purchased at the club office.

The stadium sits in the North of Lubeck and for this match had a reduced capacity of 10,341  which was completely sold out.

In the build up to the match, Lübeck fans were advised to travel by public transport.  Travelling from just 125km away, the club were clearly expecting many fans of Hansa Rostock.   Season ticket holders and existing members had been able to purchase three additional tickets and it was possible that some of these tickets would be sold on to opposition fans.

We arrived at Lubeck HBF from Hamburg and decided to walk.  Our paths immediately crossed jubilant and loud Hansa Rostock fans, one of which had climbed a lamp post, leading the chants and moving it subtly from side to side with every swing of the arm.  The police stood there watching, as though they were happy if the energy would be contained to just this.

Along the route we passed the Old Town and stopped for lunch and a beer on the River Trave that passes through the City.  We would recommend the restaurant Yachtzimmer where we tucked into a Schnitzel and a large Duckstein Beer.  It was a contrasting scene there, with a lady calmly celebrating her mothers 101 year old birthday on the adjacent table, taking in the beautiful scenery, whilst 12 Hansa Rostock fans would take a table directly outside the bar created a different atmosphere entirely  (I must point out this was just loud and nothing more).  The volume rose when the police escorted a tranche of Hansa Fans past the top of the road, across the Holstenbrucke and towards the ground.

This is a great location to watch the river boats and even an amphibious bus, which offers tours, came past which is quite a sight! 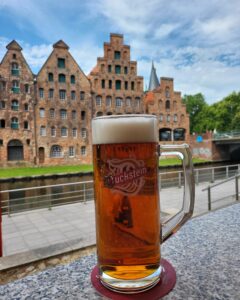 On arrival at the ground we met René.  René had assisted us in obtaining two tickets seated together inside the ground.  Due to the fixture and the way the club had allocated tickets, infiltrating local members was the only way to obtain them.  Indeed we had further assistance from another Lubeck fan, Tommy, and ended up with an extra ticket too. Great fans who were happy to assist us and go out on their way for us.

Immediately outside and around the ground it was possible to purchase beers from small pop-up vendors.  The first chap we passed, who was offering scarves and bucket hats, was also showcasing cans of Holstein Beer for 2.5 Euro per can.  The can’s were cold, however that was as good as the beer description would be.  We didn’t purchase bucket hats. 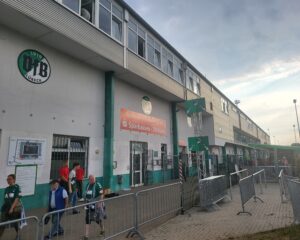 When chatting to René , and other Green and White fans, we were keen to understand the predictions for the fixture and whilst they were happy to give their thoughts on a possible victory, time and time again we heard the same thing – that the club NEED to win due to the financial benefits of reaching the next round.

It wasn’t just Lubeck fans who would struggle to obtain a match ticket.  Hansa Rostock had an allocation around the 2000 mark so it was never going to fulfil the demand.  As you would expect, a club with such a passionate fanbase would bring other fans the short distance.  Inside the ground the Hansa Rostock fans had already taken root.  The banners and flags were expertly placed and the fans packed out the entire section behind the goal.  Above the blue and white army were other fans sitting on the roof and it was unclear whether they had been hoisted up from inside the ground or had entered via a different route.  They certainly did their part in creating a great cup atmosphere.

Ahead of kick-off in this DFB Pokal match, “Lubeck, Mein Lubeck” was played through the speakers as both sets of supporters delivered their chants.  The match started at a good pace and it was Hansa who almost had the opener in the 3rd minute and as the ball squirmed towards the line, the Lubeck keeper Kirschke was able to grab it.  At the other end almost instantly, Lubeck could have taken the lead but a miskick in-front of goal quashed that anticipation.  Hansa Rostock came closest in the first half when a header from a free-kick was glanced just wide, but for all the effort from both teams, shots on goal were limited and it was 0-0 at Half Time.

It was a hot day and for the whole 90 minutes the pitch and players were in direct sunlight forcing regular drinks breaks.  Such was the heat it was surprising that it took until the second half for the Baltic Boyz to remove their blue and white trikots in unison to continue their chants in the Away section.

The second half had started with Hansa Rostock on the front-foot but after 10 minutes or so the tide turned.  At 0-0 Lubeck clearly saw the game there for the taking.  It was. As tempers flared, several bad tackles saw Rostock players shown the Yellow Card.  As the tempo rose there was a moment which stood out.  A ball had been knocked towards the corner flag and number 10 gave up the chase, conceding that a goal-kick would be the outcome.  But 10 yards behind him was one of the older generation, number 31 Boland who decided to sprint past his colleague and retrieve the situation, keeping the ball on the pitch.  When that period of play ended, words were passed from the 35 year old to his younger colleague and it wasn’t long before a tired looking player left the pitch.

Then came the moment.  On 78 minutes a great strike from Tarik Gözüsirin curled towards the Hansa Net.  It was one of those strikes where it left the boot you were already standing to appreciate the outcome.  The Lohmuhle erupted – the victory they craved for the club was happening.  View a great photo in the clubs own report here.

Perhaps Lubeck haven’t been in this position very often, perhaps the excitement affected judgement, perhaps it was the game plan.  Whatever the reason, something strange happened.  Here was a Regionalliga team winning 1-0 against Bundesliga 2 opposition in the DFB Pokal, yet there was to be no respect for that.  Immediately from kick-off Lubeck went for the throat – attack, attack, attack.  Lubeck were looking for more, even in the 86th minute they surged forward and only a dangerous cross eluding the oncoming strikers prevented the hosts from doubling their lead.

In the 93rd minute, when in a neutral area of the pitch, rather than hold the ball and head to the corner, they continued to look for that next opportunity.  On a couple of occasions they did get caught out, but recovered.  What these actions created was a crowd cheering them on with every pass and dribble, the atmosphere was fantastic.  The four minutes injury time was up and the whistle was blown.  They had done it.  A mini pitch evasion of squad players and coaches followed with players evidently overcome by their achievement.

This is the first time that Lubeck have qualified for the second round since 2009.  Whilst I imagined many fans would want another bite at a big club, René stated  “I would like a third division club to make it to another round, not really hoping for Bayern or Dortmund…” and I completely understand that.  Enjoy the cup run and long may it continue – you have our support in the next round and who knows, the opportunity to reach the final in Berlin next May is still alive! 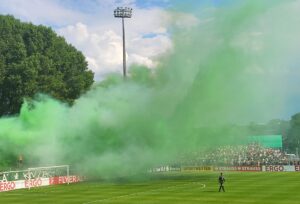 The match is temporarily paused to clear the green fog

If you are familiar with German Football Shirts you will be familiar with the term “Trikot” which means Shirt.  Our product Bundesliga Boxes, has featured these on a couple of occasions and have grabbed peoples attention often with striking green and white stripes.  If you love German shirts and memorabilia go take a look at our other website www.bundesligaboxes.co.uk

Our Covert Football Trips which you can enjoy, always offer time to explore the city you are visiting and Lubeck is a must-see destination.  After the match we walked about 1.5km to Sudden Death Brewery, we booked in advance and this was a good decision as on arrival people were being turned away.  The Brewery is a large, spacious venue with all their beers available on draft or in cans.  We were able to feed ourselves from a menu of superb pizza’s too where we discussed the match at great length. 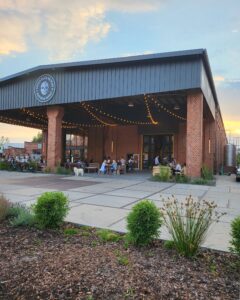 Sudden Death Brewery offers their own beers and great pizza.

After checking into our hotel we wandered around the area, it really is a city to explore.  We found ourselves pulled towards some music being played and we ended up along the waterfront known as Obertrave.  It was a quiet, yet atmospheric place where locals bring their own drinks and chill out on the steps as the sun sets.  Following lots of walking in the heat, this was a welcome break. 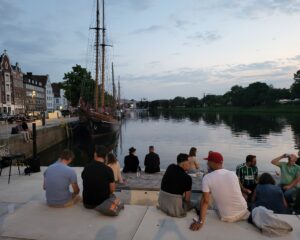 Later in the evening we would recommend Brau Berger which is a brewery and restaurant.  Here you can first sample their various beers before selecting your favourite.  The rack of 4 different style beers costs a reasonable 5.5 Euro.  The staff were attentive and happy to discuss the types of beer we were sampling. 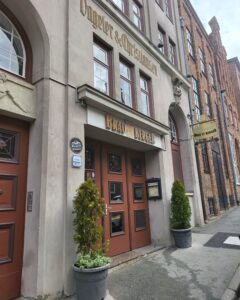 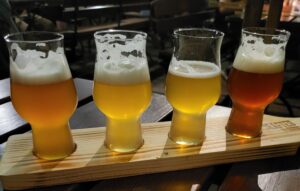 Try out the beers and select your favourite.

Finally, you won’t be able to visit Lubeck without being told that it is the capital of Marzipan.  We passed many places offering this and before departing, returned to Lubecker Marzipan-Speicher where we tasted and purchased various types.  A really nice end to a fantastic football and cultural experience. 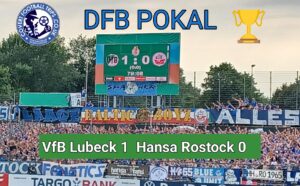