A Berlin Football Weekend was the agenda for our latest football trip however this was not the original plan.

The trip was initially scheduled for Munich which EasyJet cancelled. Our rearranged football weekend to Prague fell foul to the same reason whilst our 3rd destination, Slovenia, was swiftly added to the UK 14 day isolation list.  Berlin therefore was our 4th choice.

After arriving from Gatwick on Friday 2nd October 2020 at 15.50pm, and to make the most of our first evening, we arranged a taxi to meet us at Tegel Airport and within 30 minutes of landing we were checked in at our hotel.  A 10 minute turnaround and we were off to the trendy area of Berlin, Charlottenburg, to the Brauhaus Lemke am Schloss.  It was quiet and the staff were attentive. My choice of currywurst and my friends Schnitzel arrived within minutes.

Our Berlin Football Weekend started on the Friday night with Tennis Borussia Berlin versus Union Fürstenwalde in what is known as the Berlin-Brandenburg duel in the Regionalliga Nordost. Three of our matches this weekend were all taking place in this division so it would be interesting to see the level of each team.

Tennis Borussia entered the match in poor form, sitting in 18th place whilst their opponents sat 5th.  The tickets were print-at-home tickets costing just 11 Euro each and on arrival, as per the Covid-19 policies, they meticulously checked our ID against the names on the tickets.

After perusing the pop-up club shop, we made our way round to the far side of the ground where home fans played drums, with a chorus of vuvuzela’s  playing continuously too.  The spectators in this area created a great atmosphere and the varied support from different nationalities was evident as we found ourselves speaking to fans from Argentina and America.  Stickers and flags opposing Homophobia and Racism were multiple and this helped create a very united and friendly crowd.

Tennis Borussia started brightly and they took a deserved lead with a 16th minute strike.  The second goal was nodded home in the 43rd minute with the 3rd goal quickly added a minute later as Rudolf Nduala (known by fans as Rudi) literally danced through the defence, round the keeper and slotted home from an impossible angle just before half time for a 3-0 lead. 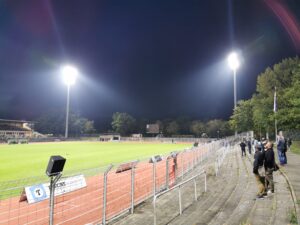 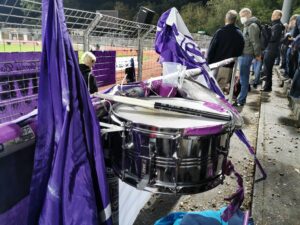 The instruments used throughout the match. 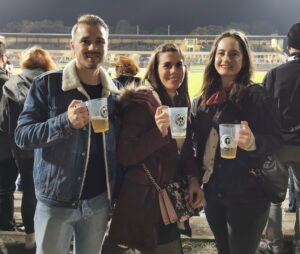 Argentina and America amongst the nationalities at the match. 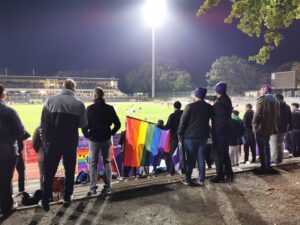 The Tebe fans came wearing the colours of their team and at half time we met Herr Lehmann, the dog, named after the former Arsenal, Stuttgart and Schalke keeper, who was also wearing the team colours.  In the second half Fürstenwalde struck in the 53rd minute however the three goal cushion was restored nine minutes later as Daoud Iraqi scored his second of the game.  There was to be a final consolation goal for the visitors in the 78th minute – we actually missed this as we stood talking to Ben Hopper (follow him on Twitter here) and his crew who were in Berlin doing the same match trilogy as ourselves.  Missing goals seemed to become a theme of this weekend… 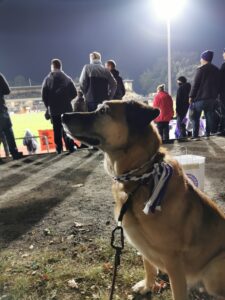 One of the top moments of our Berlin Football Weekend was blagging our way into the press conference after the match, and then have a chat with Tennis Borussia coach Markus Zschiesche. He explained that the average age of the team was 21 and his aim was to keep the team in the top 18.  Markus explained how he had previously managed Bonner SC who we visited just two weeks previously. 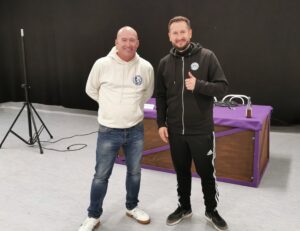 We discussed the performance with Tebe Coach Markus Zschiesche.

Saturday was our cultural morning and whilst this was my 7th visit to this amazing German City, it was my first opportunity to visit the East Side Gallery, at 1.3km in length it’s the longest remaining piece of the wall still standing.

As you walk along the graffitied route you realise how tall the wall was and how difficult it would have been to not only scale it, but reach the other side of the land where East German guards were ready to shoot on sight.   For 30 years this concrete structure divided East and West Berlin and the graffiti started to appear immediately after the wall came down in 1989.  This area now has protected memorial status. 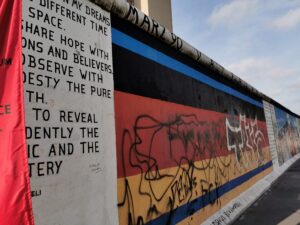 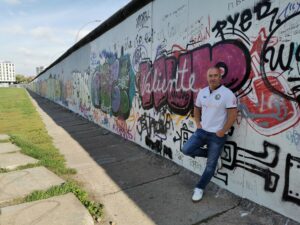 The East Side Gallery extends 1.3km 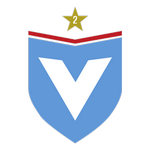 We left East Side Gallery and headed straight to our 2nd match of our Berlin Football Weekend at Viktoria Berlin who went into the match versus Auerbach with a maximum 24pts following 8 straight victories. You could see why, Viktoria were excellent.

Ahead of this match we had identified that Fergal, owner of the fabulous Halb Vier Fanzine, was also groundhopping and after making contact arranged to meet ahead of the match.  If you haven’t read Halb Vier then you are missing out, the fanzine is full of stories from the past and current day ground experiences in a great glossy A5 cover.  Issue 4 is imminent and you can subscribe to Halb Vier here. 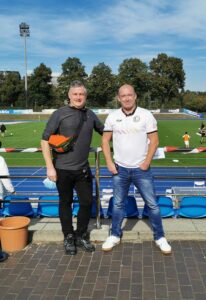 The first half was spent seated in the main stand and from here we saw the first goal of the match which put Viktoria one-nil up.  When arriving at the ground the blue is evident, both the seats and the running track, sending a clear message, this is the home of Viktoria 1889 Berlin! 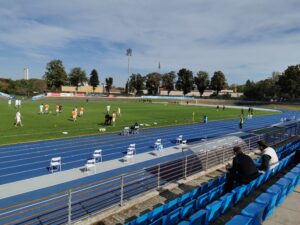 The bright blue running track surrounds the pitch at the Stadion Lichterfelde, Berlin.

In the second half we walked round to the standing area on the other side.  Here we met a group of Hertha BSC fans who were here to watch the match.  It still amazes me how shocked people are when you tell them the sole reason for coming to Germany is to watch the football!  Yannis Becker doubled the Viktoria Berlin lead in the 53rd minute.

The 3rd goal was stunning.  As the ball is crossed in from the left, Mattis Daube takes the ball down on his chest just inside the box, swivels and scores with an amazing volley.  The power in the kick was immense however I was the only one in our group to see this piece of magic as discussions carried on with the locals.  Fortunately for everyone else I have found this footage – slide through to 2 minutes  and 25 seconds of the below video to see the amazing strike!

Just as the game seemed won, Auerbach had other ideas and two goals in the 80th and 86th minute created a nervous ending to the match but Viktoria held on for their 9th straight victory as they march towards promotion to 3Liga.  Tickets for this match had cost €13 euro and were again print at home tickets.  ID was vigorously checked on entry as due to Covid-19 measures are taken to ensure the named person on the ticket is the person attending.

After the match we were invited to a local bar by the German group we had spoken to.  Palast-Klause bei Ivan was a real local pub showing Sky Sports and we spent a few hours sharing football stories and sinking a plethora of beers and shots which were constantly being presented to us.  As always we felt very welcome in Germany and the grounds we visited. 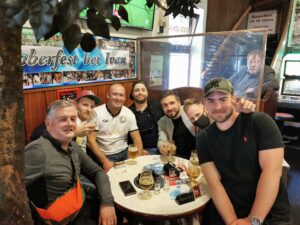 Our Berlin Football Weekend continued with a match which hadn’t been on our radar however whilst chatting at the Tennis Borussia match on Friday evening we were advised that there was an under 19s match at Stadion An der Alten Försterei, the home of Union Berlin.  We couldn’t resist visiting the ground albeit we wouldn’t be able to complete the full 90 minutes due to the kick-off time of match number four.

Much hype surrounds this stadium, and more so the well documented walk through the forest to get there!  The fables didn’t exaggerate as we walked through what would be an amazing experience with 20,000 fans walking through.  Instead we were on our own as most of the 1762 fans there had already arrived.

Getting into this ground was more intense than the previous two.  With free entry there were lot’s of children there supporting however even they were getting the full body search.  Again names printed on tickets had to match your ID or else you wouldn’t get in, due to Covid-19 restrictions. 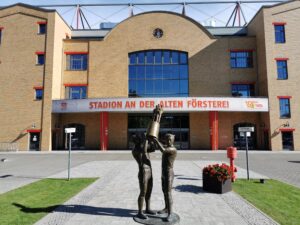 Outside the Stadion An der Alten Forsterei

Union u19s were facing Fortuna Dusseldorf u19s and the away team were certainly the stronger.  It was no surprise to see them take the lead and then double it with a penalty before half-time. Walking round inside the stadium we were shown what is a famous manual scoreboard where still to this day someone changes the score by reaching out of the window. These small things are great nuggets of information you learn when visiting grounds for the first time. 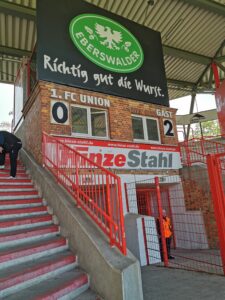 The manual scoreboard at Stadion An der Alten Forsterei 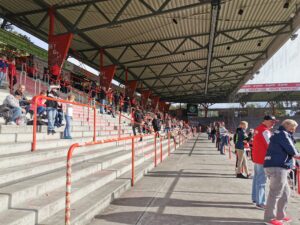 For the final leg of our Berlin Football Weekend, we left the Union stadium at halftime, and after scouring the club shop we opted for another Uber to get us round the city to our next stadium.  The cost was €38 however it gave us a relaxed experience getting to the ground, even if our taxi driver was a bit on the erratic side.

Altglienicke are a German sports club based in the locality of Altglienicke in the borough of Treptow-Köpenick with the teams again participating in the Regionalliga Nordost.  However they currently play at the lovely Friedrich-Ludwig-Jahn-Stadion which seats 20,000.  We opted to purchase tickets in the Away section and it was certainly a good choice.  The stadium itself was seated all the way round and was used to host the 2018 World Para Athletics European Championships.   The Friedrich-Ludwig-Jahn-Stadion is Berlin’s third largest stadium.

As a background, in the 2019/20 season Lok Leipzig had won the league, only to miss out on promotion to 3Liga via a Play-Off defeat to SC Verl.  The hosts meanwhile had finished 2nd so we were expecting a close and pulsating encounter.  On arrival the structure was impressive, the floodlights dominating the whole stadium. 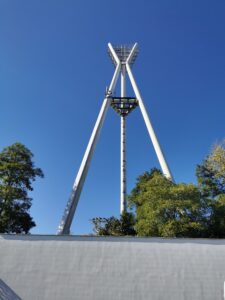 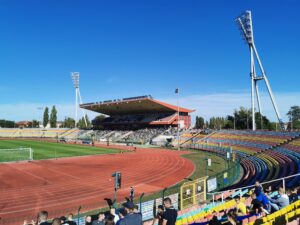 From the very start, Altglienicke were superior and each goal was met with the tune from what I recall being The Banana Splits TV theme tune!  The first goal was a delightful little dink by Christian Skoda after 6 minutes and this really set the tone for the match.  Some of the play was simply bizarre, after beating the offside trap, Patrick Breitkreuz had his effort saved and as the ball bounced away for a corner (which the linesman indicated), Breitkreuz had managed to scoop the ball back into the box.  The goalkeeper flapped at it, pushing it into the path of the on-coming striker who could only miss an open goal.  The second goal followed after 22 minutes as a dangerous ball across the box hit the defender and bobbled in for a 2-0 half time score.

In the second half Altglienicke continued their dominance as they added three more goals.  Goal number four was the pick of the lot and was quite sensational.  Tolga Cigerci picked the ball up, beats 5 defenders, spins and fires into the far corner, before also adding a 5th in the 77th minute too.

After the match we headed to a local bar called Zur Insel which was just a 4 minute walk from the stadium and provided an immediate venue to regroup with Fergal from Halb Vier where we were able to discuss the experience from alternate ends of the stadium.  From here we headed to Willy Bresch, a small local bar which showed live football and we settled down to watch Bayern Munich 4 Hertha Berlin 3 which provided great entertainment.

This brought our Berlin Football Weekend to an end.  4 Matches and 19 Goals was more than we could have hoped for.   Of course, our own experiences are used to help create magical Mystery Football Weekends for you.  At present we are still not offering our packages, however our latest TOR! Package offering 2 Mystery German Matches, Flights and Hotels may be something to consider in the future.  Check out our latest package here. 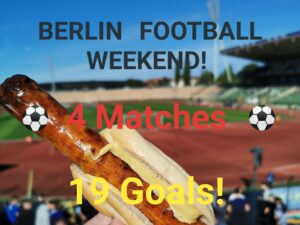